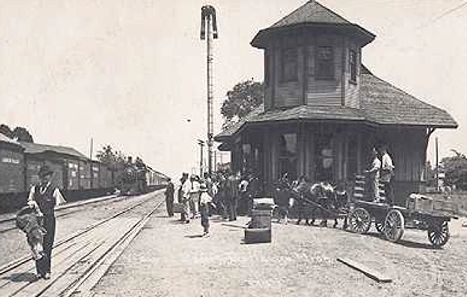 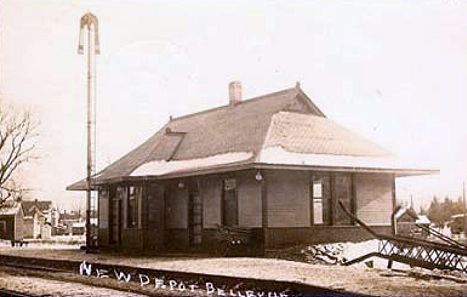 Bellevue, in southwest Eaton County, was settled in 1832 with the spelling of Bellvue, It was changed to Bellevue in 1841, incorporated as a village in 1867. [MPN]

The town was a station stop on the Grand Trunk Western main line about 12 miles southwest of Charlotte, the county seat.

Photo info/credits:  Top and 2nd photos, early photos of the GTW Bellevue depot with the tower in place. [Alan Loftis Collection]. 3rd photo, Grand Trunk 2314 leads a three car passenger train which has stopped to take on and discharge passengers at the depot.  The locomotive appears to be a 4-4-0 which was common for passenger trains around the turn of the century.  The "tower" behind the depot is actually part of the structure itself. It may have been used as a watch tower for the crossing guard who was posted at the nearby road crossing. The train order/block signal indicates "proceed" for the passenger train and "stop" for opposing traffic. [Alan Loftis Collecton] 4th photo, the depot after the tower was removed and other modifications made. [Alan Loftis Collection]