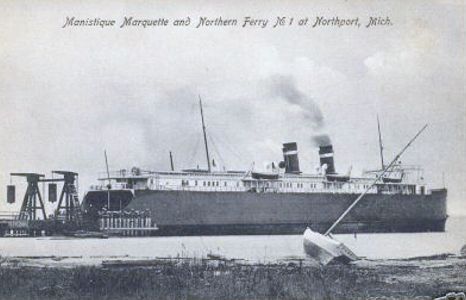 Railroads, ports and docks go hand and hand, especially in the early days. The first settlers came to the lower and upper peninsula of Michigan by water.

Detroit's early railroad depots were along the water. The Michigan Central railroad's main passenger station from around 1845 to 1908 was at the foot of Third Street. It was no coincidence that the Detroit and Cleveland Navigation Company was located across the street. Settlers could get off their steam-powered paddle-wheeled ship, freshen up, and then cross the street to board their passenger train go to west to Ann Arbor, Jackson, and even Chicago.

As railroads developed across Canada from Toronto and Buffalo, railroad passenger ferries brought people across the river to Detroit, followed by railroad car ferry operations which also terminated near both of these waterfront depots.

Railroads also had car ferries which operated from ports on Grosse Isle, Port Huron, the Straits of Mackinaw, and many towns along both sides of Lake Michigan.

Ports were also used to transload mine products from railroad to ship, and visa versa. Copper ports included Houghton and Hancock. Iron ore shipped from Marquette, Gladstone, Escanaba, and a number of other locations even including St. Ignace for a short period. Limestone was shipped from many ports along Lake Huron (some of which continue to today).

Coal shipped to almost everywhere. Whenever you had an industrial port, boats brought coal north from Ohio and other states to power industrial and municiipal power plants.

The Car Ferries | Ports | Docks section of RRHX attempts to document the major connection points between rail and water in and near Michigan.

Photo info/credit: The Manistique, Marquette and Northern Ferry No. 1 at the dock at Northport loading rail cars for a trip across Lake Michigan to Manistique. [Alan Loftis collection]