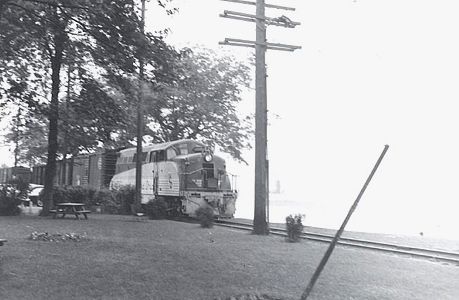 The French built Fort St. Joseph here in 1686 to protect their fur trade from English aggression.  This garrison was transferred to Mackinac in 1688 when the fort burned. The area was permanently settled in 1790. In 1814, Fort Gratiot was built and the town was organized in 1828, called Desmond. Desmond and Gratiot were renamed Port Huron in 1837. Port Huron became a village in 1849 and a city in 1857. [MPN]

In 1859, the Chicago, Detroit & Canada Grand Trunk Railroad was built between West Detroit and the Fort Gratiot area of Port Huron. In 1869 the Grand Trunk built west from downtown Port Huron towards Flint. Other roads to reach town were the Port Huron and Northwestern from Bad Axe in 1879, the Pere Marquette's Almont branch in 1882, and the Port Huron and Northwestern from Saginaw via Marlette in 1889. Later in 1916, the Detroit, Bay City & Western reached the city from Bay City in 1916 and its related road, the Port Huron & Detroit went south from town in 1918. [MPN]