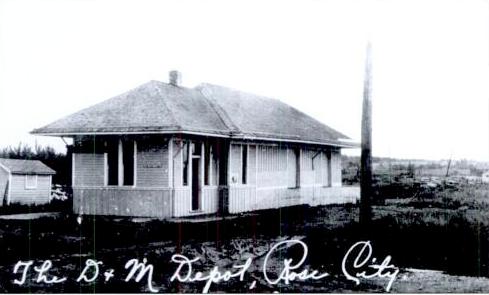 Rose City was settled about 1875 with a hotel established here. The French & Rose Lumber Company was one of active lumber firms here. In 1892, the Detroit & Mackinac railroad established a branch line here and called the town Churchill. It was renamed shortly thereafter as Rose City and the railroad's branch line was named the Rose City branch. The town was incorporated as a city in 1905. [MPN]

Photo Info/Credit: Top, the D&M depot at rose City, at the end of the Rose City branch. [TJ Gaffney collection]. 2nd photo, another view of this depot which appeared to have a disproportionally large freight section when compared to the passenger waiting room. [Alan Loftis collection]