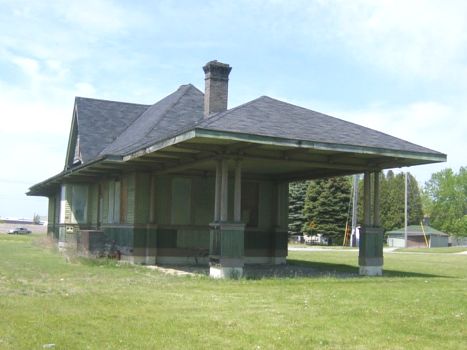 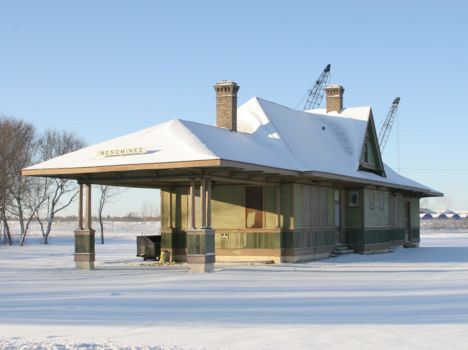 Menominee was settled about 1836 when the Farnsworth & Brush company built a sawmill here, soon followed by others. The Chicago & North Western railroad came through here in 1871. The town became a city in 1883. [MPN]

Menominee, along with its neighbor Marinette, Wisconsin across the river, serves as a port and industrial center. The town is served by the C&NW (now CN) as well as the MILW (now E&LS). For many years, an Ann Arbor railroad car ferry brought cars over to this port from Elberta on the other side of Lake Michigan.

Photo Info/Credit: Top, a 2003 photo of the former Milwaukee Road depot in Menominee. [Greg Bunce]. 2nd photo, the same depot in the winter of 2007. [Dale Berry]

The Milwaukee Road depot here was built in 1885. It was located at 219 Third Street and measured 20' by 80' with a hipped room with wide overhanging eaves supported by wooden brackets. There is also a covered passenger waiting platform, 25' by 30' at the east end of the station. [UPM]

November 16, 1906. The office of general passenger and freight agency for the Wisconsin & Michigan railway is moved from Menominee to Chicago. [RG-1906-1116]

1918. MILW had a station agent here on all three shifts. The C&NW had an operator on the day and afternoon shift. [TRT]