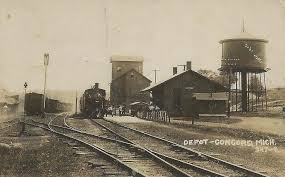 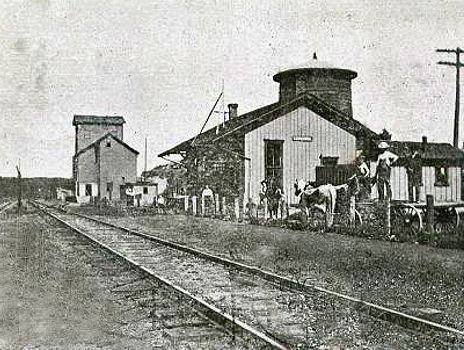 Concord was settled in 1832 in southwest Jackson County. The town was also known as Van Fossenville. It was renamed Concord in 1836 and incorporated as a village in 1871.

Concord was a station stop on the Michigan Air Line railroad (later Michigan Central/NYC) about 14 miles southwest of Jackson.

Photo Info/Credit: Top and 2nd, an old photo of the Michigan Central depot, elevator and water tower in Concord. You can see farmers with their horses at the right and a standpipe for the water tower at the left of the branch line. [Dale Berry collection]. 3rd photo, a closer shot of the depot with a group of nattily dressed onlookers. Note the velocipede on the track and the train box on the wall of the depot, commonly used on the MC Air Line branch.

1920. On the Michigan Central Air Line, this is a passenger, freight and express agency joint with the American Railway Express Company. Interline tickets are issued. E. J. Boylan is the agent. The telegraph call sign is "CD". [MCOAS]