Early on until 1981 - Dispatcher in Owosso. In 1981, control of the track from Osmer (north of Ann Arbor) south moved to Michigan Interstate (later the reconstituted Ann Arbor Railroad) operator at Hallett. In 2019 to Watco dispatcher when Hallett closed.

This operation took over dispatching operations from Penn Central, and little was changed from the NYC, PRR and Penn Central operations. See those categories below. For current Conrail Shared Assets lines today, see Existing Dispatch Centers.

The C&CS dispatcher was at Slocum Junction, near Trenton. He dispatched their main line from Grosse Isle to Fayette, Ohio (via Dundee, Petersburg and Morenci), and the C&CS line between Toledo and Detroit. After the purchase of this line by the MC and truncation of the main line between Dundee and Grosvenor, dispatching functions were transferred to Detroit.

The C&NW in Michigan was dispatched out of Green Bay, WI and Escanaba, MI at various times. [CNWPD2]

The original D&M was dispatched from two locations. One in East Tawas controlled the south division between North Bay City and Alpena, as well as branches. The second dispatcher was located at Alpena Junction, at the rear of the roundhouse. This included their main line and the Valentine Lake Branch (old Alpena & Northern). Both of these operations were confirmed by a 1902 D&M timetable. A 1911 timetable indicated that these were dispatched "by telegraph" except that the Rose City branch was dispatched "by telephone". The D&M purchased the Au Sable & Northwestern which according to timetables was controlled elsewhere, possibly by the Au Sable operator. All dispatching operations were consolidated to Alpena at some point. They were moved to Tawas in the 1990's after sale to Lake States Railway, and then to Saginaw.

The Detroit, Bay City & Alpena also had a dispatcher at Lake May, Jct. in Alcona. He dispatched only for the branch to May Lake.

Dispatcher was located at Lang Yard offices near Toledo.

Prior to Ford ownership, it appears that DT&I (and predecessor) lines in Michigan were dispatched from facilities in Tecumseh. During some of this period, the DT&I dispatcher controlled the LS&MS line from Tecumseh to Dundee on which the DT&I had trackage rights. After Ford ownership in the 1920's, dispatchers were located at DT&I's office building in Dearborn.

The dispatcher was located at Royal Oak Junction for their lines to Pontiac, Farmington, Wayne, and Flint in 1902.

Most Michigan lines were controlled by dispatchers in Marquette.

Originally dispatched from offices in Wells. Later moved to Channing after takeover of MILW lines north of Green Bay. 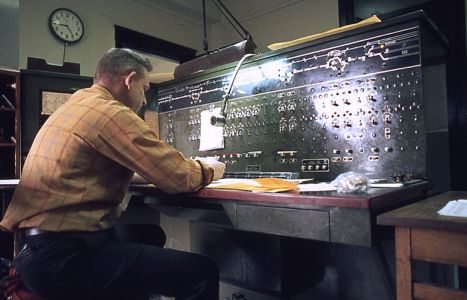 Photo Info/Credit: A photo of the GTW dispatcher in front of his CTC machine at Durand in 1969. [Doug Leffler photo.]

From at least 1935 to at least 1974, the GTW had a dispatcher at Pontiac Yard, who dispatched the Holly subdivision, and probably other lines which radiated from Pontiac such as the Air Line to Jackson. In 1974, the CTC which covered the Holly Sub from M.A.L. Junction (in Pontiac) north to Durand was controlled by the GTW Pontiac dispatcher.

These dispatchers were consolidated and moved at some point to the 2nd floor of Durand Union Station and then in 1971 to Pontiac Yard.

Dispatching was moved from GTW to Cincinnati, OH when the I&O was formed. Unknown status.

See the New York Central.  At various times, the Lake Shore had dispatchers located in Elkhart (controlling the line from White Pigeon to Grand Rapids), White Pigeon (controlling the same branch to Grand Rapids) and Hillsdale (controlling many LSMS branches in Michigan). During much of the NYC era, Michigan lines were controlled from Toledo (Old Road) or Hillsdale (other Michigan branch lines). The dispatchers in Hillsdale were located in an office building east of the Hillsdale depot. The building still exists and is used by the Indiana & Northeastern.

LS&I dispatchers were in Marquette. During the 1960's, lines of the LS&I, DSS&A and Chicago & Northwestern were consolidated and dispatched by the DSS&A in Marquette, much of it using CTC. The CTC machine was later transferred to the LS&I control operator at Eagle Mills.

Most Michigan lines in the Upper Peninsula were dispatched from Channing. 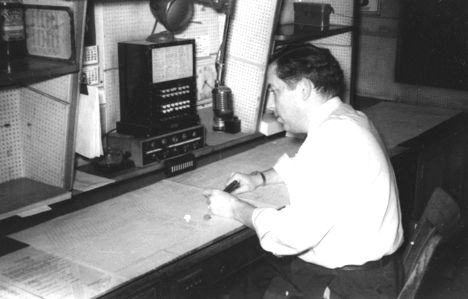 The NYC had six main dispatching centers covering Michigan and nearby areas.

Bay City. Covered Saginaw to Mackinaw City, branch lines. Lines in Saginaw were automatic block system in later years. Others were dark territory. Dispatcher was located at the Bay City East Side station.

Hillsdale. Dispatched most old LS&MS lines in the first (south) tier of counties, including the Monroe Branch, Fayette Branch, Jackson Branch, Lansing Branch, Fort Wayne Branch, and White Pigeon to Grand Rapids Branch. Did not dispatch the Old Road (dispatched by Toledo). Dispatcher located at the Division office building, east of the NYC depot at Hillsdale.

Jackson East and West. Jackson east dispatcher covered from Town Line (Dearborn) to Jackson, and the branch from Jackson north to Saginaw. Jackson west dispatcher covered main line from Jackson to Niles and branches including the Air Line and Grand Rapids branches. Originally located in an office building at Jackson Jct. (yard area) they were moved to Jackson's depot in the 1960's. The Air Line was converted to CTC in the 1950's to handle increased high speed freight traffic from Jackson to Elkhart Terminal.

Other lines needing research: Cincinnati Northern line from OH to Jackson, and the Benton Harbor Branch from IN to Benton Harbor.

Southeast Michigan dispatched from Toledo, including the line from Bucyrus, OH to Galena (Toledo) and the Carleton to Lincoln Yard (Lincoln Park) branch. Their Fort Wayne, IN dispatcher controlled lines north from Indiana to Mackinaw City, and other branch lines in Michigan. This ended sometime after the Penn Central merger. Needs researching.

In 1898, the F&PM had dispatchers in Saginaw and Port Huron.

Their electric line from the Detroit city limits to Port Huron and branches via Grosse Point and Algonac were dispatched by telephone from their offices in Mount Clemens. [SRJ-1902-1004]

T&SB took over state-owned rail lines in central Michigan, including most of the Ann Arbor north of Osmer (Ann Arbor) and the old GR&I/PRR line from Cadillac to Petoskey. These were dispatched from the office at Owosso. Entire operation moved to the Great Lakes Central.

Note: Additional research is needed for many of these lines and myriad of other lines in Michigan.  If you have any additional research to contribute, please send it to This email address is being protected from spambots. You need JavaScript enabled to view it..