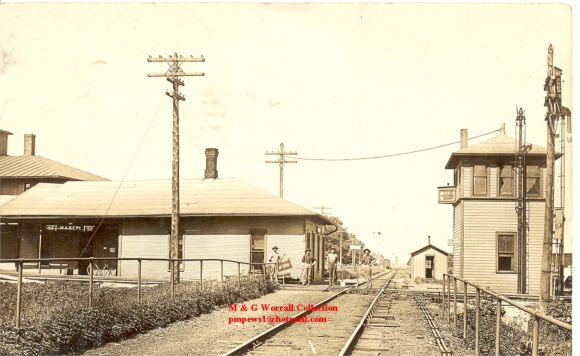 The picture below is of the Wasepi, Michigan crossing of the Pennsylvania Railroad GR&I Branch (which started at Fort Wayne, Indiana and ended at Mackinaw City) and the Michigan Central Railroad Airline Branch (which started at Jackson and ended at Niles).  The depot on the left belonged to the PRR, but the interlocking tower on the right was the property of the Michigan Central.

You will note that the interlocking tower has an interesting "display box", sticking out on the MCRR side of the structure, which have numbers that face approaching trains.  The display box appears to have a chimney vent on top, suggesting that it was lighted from within by an oil lamp.

Railroad historian Mark Dobronski came up with the answer from a Michigan Central Railroad employee time table No. 322, dated November 2, 1897. Rule No. 59 on page 17 says:

"Operators at stations where the train signal boxes are in use to show the time of departure of any train, will change the same immediately after the departure of each train, giving the correct time such train passed, and are required to see that signal boxes are kept clear from snow and ice, and that the figures are clearly shown.  Trains will be designated as follows:  Regular trains by [N.]  Specials by [S.]  Extra by [X.] Engineers and  Conductors are required to report to their Division Supt. any cases which may come to their knowledge where the time of a preceding train is not correctly or plainly shown, and also all cases where signal boxes are not lighted after dark. The time of regular Freights or extra train must not be taken until Way-Car passes the Telegraph office."

If you examine other depots on the Air Line between Jackson and Niles, they are common. Wasepi may have been the only interlocking tower to have such a display box.

So, this appears to solve the mystery.  These boxes were used to let trains know who was ahead and how long it had been since the last departure.  This apparently gave following engineers some form of comfort that the way ahead was clear.  We're not sure whether these were used anywhere except for the MCRR's Airline branch.