Story: How Wagon Works Junction Got It's Name

The name "Wagon Works Junction" has always been intriguing. This location has been a staple in New York Central timetables for over one hundred years, and it is still used today by the Norfolk Southern railroad as a staging area in Toledo, Ohio.

So, when did this become Wagon Works and why?  First, some history.

The first railroad built between Toledo and Detroit was the Detroit, Monroe & Toledo railroad, a construction railroad which immediately became part of the Michigan Southern & Northern Indiana (later LSMS) in 1856, and a direct competitor with Detroit's Michigan Central. This road gave access by the Lake Shore to Detroit, which was theoretically prohibited by the original MC charter when the "Southern" line was sold by the state. The LSMS later ran at least one through train per day between Chicago and Detroit via Monroe using this line, in competition with the MC and others.

The second, competing railroad between the two towns was built in 1873 north and south from Grosse Isle, by the Canada Southern railroad which had started a car ferry between Amherstburg, Ontario and Trenton (via Grosse Isle) to give them an ill-fated line west towards Chicago (via Petersburg and Fayette, OH), as well as north and south connections to Detroit and Toledo. Originally owned, in part, by stockholders of the Toledo, Wabash and St. Louis Railroad, they envisioned the CS as a connection by Wabash in Toledo to Canada to Buffalo. This is apparently why the CS was built to a point south of Toledo on the Maumee River, rather than into downtown Toledo. But financial conditions put the line into receivership and stock was purchased by Vanderbilt interests in 1882.

These two lines between Toledo and Detroit were close to each other, sometimes adjacent but much of the line was as much as 1/4 mile apart.

The Canadian Southern came under control of the Michigan Central around 1876 as part of the Vanderbilt stock purchase, and the Lake Shore and the Michigan Central also came under the control of New York Vanderbilt interests. Though they were operated as separate railroads until 1916, they collaborated as early as 1900 on the Detroit to Toledo section by operating both segments as a double-track main line. The CS line was the northbound segment, and the Lake Shore line was the southbound segment. Even though the lines were as much as 1/4 mile apart, longer-than-normal crossovers were installed at several locations along the way such as LaSalle (south of Monroe) and Warner (north of Monroe).

As these two lines came into Toledo (in 1856 and 1873), Wagon Works Junction was not a named place.  But it was the place where these two tracks diverged farther away from each other. The Lake Shore line continued in a tangent southwest to Airline Yard. The Canadian Southern line diverged directly south to C.S. Junction (named for the "Canadian Southern") and a connection with the Wabash and later the Clover Leaf railroads. This was to accommodate the early connections for the Wabash affiliation.

Early Sanborn maps show that there was no "junction" at what would become Wagon Works Junction. The lines simply diverged here.

That all changed about 1873. The Milburn Wagon Works Company of Mishawaka, Indiana purchased the property north of Monroe Street, between these two railroads and built a huge wagon manufacturing facility. Within a few years, Milburn became America's largest wagon company, producing as many as 4,000 wagons each year for both personal and commercial use. Sidings were installed to the plant from both railroad lines and a connection was also made between the two competing railroads. At least one passenger station was built at the site on the Lake Shore, as well as freight stations on both lines. To provide for the thousands of workers at the Milburn works, the City of Toledo expanded out to this area and a street car line was constructed. The Milburn plant became one of the largest manufacturing sites in America. This was before the automobile, and horse drawn carriages and wagons were important for transportation in this era. The two railroads brought in raw product (wood, iron) and took out finished carriages which were transported throughout the United States.

The railroads named the location of this plant on their lines as "Wagon Works Junction". Even though the two railroads were now under Vanderbilt control, they continued to operate separately. As an example, the Lake Shore line to Detroit used the GTW Brush Street station (via D&M  Junction and what is now the "Dequindre Cut"), while the old Canada Southern line ( MC) used the Michigan Central's Third Street station via a connection at Grand Junction/West Detroit.

Wagon Works Junction thrived during the Milburn Works era. Even though significant parts of the plant were destroyed by a tornado, and it burned several times over the years (usually starting in the paint shop) the plant was rebuilt each time. As the automobile began to take over from horse-drawn carriages in the early 1900's, Milburn adapted by building electric-powered cars and bodies for other automobile companies into the 1920's - particularly for Ford and then Oldsmobile.

In 1923, Milburn was purchased by General Motors. Though it was speculated that the main Milburn plant would be converted to a Fisher Body plant, it was closed down within two years. Electric vehicle production was transferred to another Milburn factory. Milburn subsidiary Dana Corporation was spun off and continued to serve the auto industry for many years.

Wagon Works Junction continues to be a location along the double tracked Norfolk Southern railroad and is used today as a small staging area for unit coal trains and auto rack cars. 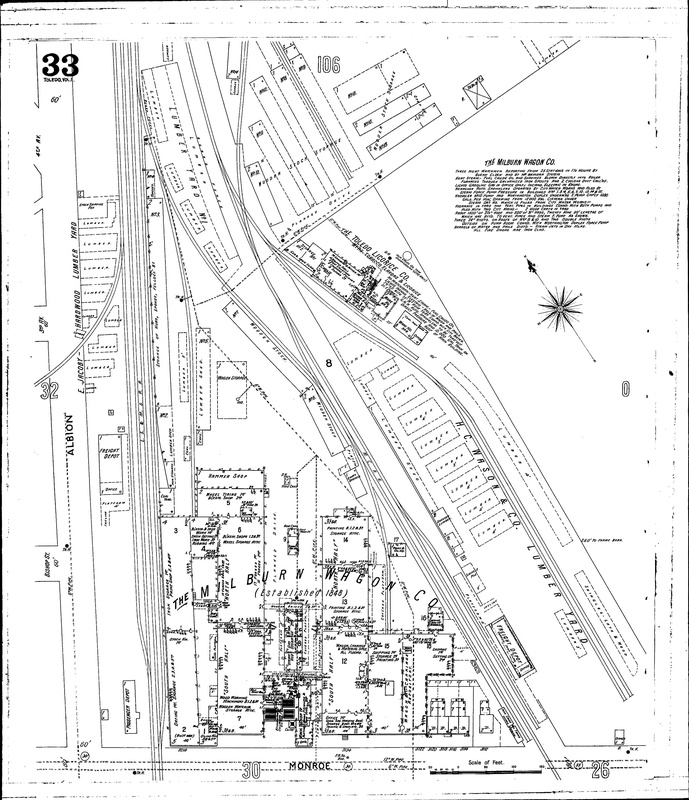