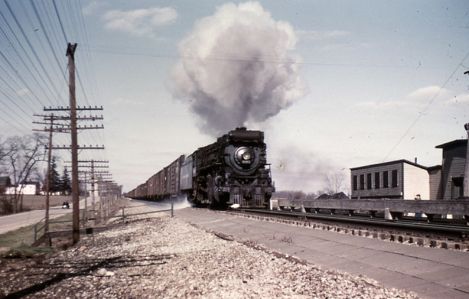 A track pan was a long, low profile box-like trough built between the rails with an open top. The box, or "pan" was filled with water. When a moving steam locomotive came over the pan, it lowed a scoop and water rushed from the pan up into the tender of the locomotive. This enabled-scooop equipped steam locomotives to take on water without stopping.

Photo Info/Credit: At left, an MC locomotive picks up water from the pan at Four Mie Lake, near Chelsea in the 1940's. [Jim FIndley photo]

Track pans were filled through a piping system from a nearby pump house. The plans were placed at locations on busy lines which were near natural above ground water sources, such as a river or lake. The pump pulled the water from the source, and filled the plan. The pumps were powered by steam, taken from generating equipment on site or the power grid in later years. These pump houses often had attendants to operate, monitor and maintain the physical plant.

Track pans in Michigan also needed heating equipment to prevent freezing in the pans and pipes during the winter months. Track pans were long and with double track main lines, two sets of pans were used. There were lighted signals at the beginning and end of each plan to instruct the locomotive fireman when to lower and raise the scoop.

Track pans were only used by the largest railroads. In Michigan, the Michigan Central had sets of track pans near Chelsea (Four Mile Lake), Marshall, Lawton, and Avery (west of Three Oaks).

There was also an MC track pan on the Air Line subdivision at Clarendon (west of Homer in Calhoun County). Though this pan was removed before the others, the MC Air Line branch was often used as a second or third main line between Jackson and Niles.

Likely the first early track pan in Michigan was located at Kinnear, east of Dexter, along the Huron River. It was later moved to Four Mile Lake near Chelsea. Kinnear was named after Wilson S. Kinnear, chief engineer of the Michigan Central railroad who developed the MC's Detroit-Windsor railroad tunnel and likely had involvement in early track pan technology.

In addition to water and track pans, steam locomotives required re-coaling during longer runs. On the main line, track pans and coal facilities were separate. Though there were three pans in Michigan, the main coaling tower was in Augusta (between Battle Creek and Kalamazoo), as well as in other towns along the line such as New Buffalo. On the MC Air Line, the track pan and coaling tower were in the same location at Clarendon. These large, over the main track coaling towers continue to exist at Augusta, New Buffalo, and in the woods at Clarendon (on private property) where the track no longer exists.

Track pans were also located along the New York Central main line at Grismore, OH, east of Stryker, OH, and at Chesterton, IN and at many other locations throughout their system.