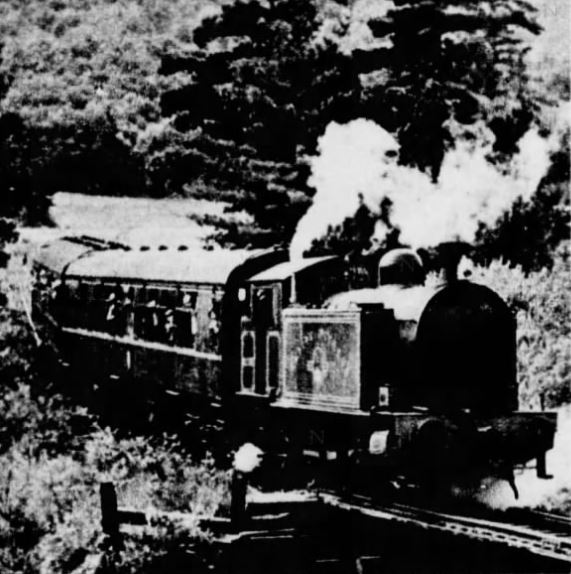 The tracks that run through the northwestern Michigan pine forest are cold, silent and overgrown with weeds now. No trains rattle through the trees past the old sawmills and over the ancient trestle bridge between Boyne Falls and Boyne City. The gingerbread depots at the beginning and end of the 7.2 mile line are deserted. The engineer, Howard Fineout, and the brakeman, George Gardner, are unemployed.

It was a sad day last October when the historical Boyne City Railroad screeched to a permanent halt after just two summers of operating a passenger service. Its last big freight account, a tannery in Boyne City, had shut down in 1970. But the new owner, Hollis Baker, had hoped to make money taking tourists for scenic rides and hauling enough small freight on the side to break even. Then the fuel crisis hit full force and Michigan's shortest complete operating railroad became available real estate.

Founded in 1893 during the logging boom, The Boyne City Railroad Company was once a much larger and busier railroad, with 92 miles of track, 13 locomotives and 180 employees. It served an array of customers in Boyne City that included a chemical works, a charcoal iron plant, four saw mills, a stave mill, a flooring mill, and piano, broom handle, typewriter and tractor factories.

By 1922, the lumber was gone. One by one the mills closed, and by 1935 the railroad had reverted back to its original 7.2 miles of track.

Baker, a Grand Rapids' furniture manufacturer, and Charles Williams, the railroad's general manager, had brought the line back to life by 1973. Down to a single train, a mixed freight with blue cars and a red caboose pulled by a baby diesel locomotive, the two men brought over an authentic English steam train with a bright green locomotive and European-style compartmented passenger cars.

They also restored the general office - a typical turn-of-the-century business establishment complete with pot-bellied stove - the engine house, car shops and railroad museum. The museum contains an antique caboose, a 70-year-old snow plow car, and a luxuriously furnished railroad car built for the president of the Munising Railroad in 1901 at a cost of more than $40,000.

No offers have been received for the complete operation, so Baker has decided to put everything - including over, 2,000 items from the museum and 600 feet of Lake Charlevoix frontage - up for public auction May 15. He hopes to sell the English train as a unit for better than $50,000. But if no one can afford a whole train, each car will be auctioned separately.

"It's a great shame," say George Gregory, a Traverse City railroad buff who is working on a history of the railroad. "There will never be such an interesting railroad for everyone to enjoy as this one. Why tear it down? They could put it in limbo for awhile. Once it's gone, it's gone".