All the electric interurban railways radiating from Detroit operate under despatcher's orders given by telephone. The methods used by the three different managements which operate these lines are very similar and differ only in detail. In each case telephones are located in cabins or booths at sidings along the line, and no attempt is made to carry telephone instruments on the cars. The orders are all received verbally, and no written record is kept on any of their lines.

The Detroit United Railway systems operates all its interurban lines, except the Wyandotte Division, from one dispatcher's office located at Royal Oak Junction, 14 miles from Detroit. From this point the despatcher has telephonic communication with he whole interurban system controlled by the DUR. His office is on the second floor of the freight office and waiting room at that phone, and commands a good view of the interurban lines which approach it from three directions.

Although the telephone lines are essentially for train dispatching, they are also used in a limited way for transaction of general business. Their use,, however, for this purpose is not encourages, and it is understood that train dispatching business has the right of way over anything else on these telephone lines. Should a line be in use for conversation other than dispatching business the employees have strict orders to immediately cease talking the instant a train crew calls the despatcher for orders, and not to continue conversation again until orders have been given. The despatchers work in three watches. They are men thoroughly familiar with the business as carried on the steam railroads and keep train sheets just as on steam roads. 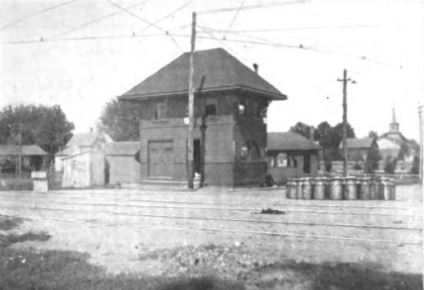 Orders are received at the telephone booths of this company by the conductors and are repeated to the despatcher by the conductor. The motorman just be within hearing to hear the order repeated back. The telephone lines are mainly No. 10 Washburn & Moen gage B.B. iron wire. In the city and when passing through trees a waterproof insulator is used on telephone lines. Telephone lines outside the city are run on brackets with pony insulators, and are transposed every ten poles, except under high-tension alternating-current lines, where they are transposed every five poles. The transposition insulator made by the Hemingray Glass Company is employed for this purpose.

The standard telephone equipment for booths consist of Stromsberg-Carlson telephone instrument No. 17 with an 1800-ohm ringer, a five-bar magneto generator which will ring through 60,000 ohms resistance. The instruments in each booth are connected wit the line through a double-pole, single-throw baby switch. This switch is open when the telephone is not in use, and strict orders are given that it shall be so opened when not in use that the line may not be rendered inefficient by having a large number of instruments bridged across it. It is possible that some arrangement for automatically cutting out the telephone instrument when the booth is not in use will be employed.

At the despatcher's office, the interior of which is illustrated herewith, there are two switchboards in duplicate for the despatcher, so that in case anything goes wrong with one board the other can immediately be switched in. The despatcher has four dispatching lines entering his office, as can be seen from the map. Connection with any on these four lines is established by simply throwing an operator's switch. The plugs shown on the operator's switchboard are for making connections between different despatchers' lines when they are used for general business.

In the ordinary dispatching operations the despatcher has only to throw his keys to connect his head telephone with the various lines. The circuits are so arranged that communication can be had with many points on the system from two directions, and double-pole switches are placed in a line at frequent intervals. In case a line is short circuited or grounded at a certain point the switches on both sides of the trouble can be opened and the work of dispatching can then be carried on without interruption.

Between Royal Oak and the general offices of the DUR at No. 12 Woodward there is a main trunk line, and in addition to this there is a line solely for dispatching extending from Royal Oak toward the city as far as Six-Mile Road. In case of an emergency the trunk line can be connected with the despatcher's circuit by means of switches located at the two telephone booths between Royal Oak and Six-Mile Road. a private telephone line is maintained by the company between the general offices at Woodward Avenue and the Jefferson Avenue shops. Another line runs from Woodward Avenue to the St. Antoine car house and the two power houses A and B. There is also a line to the Clark Avenue car house, from which car house the dispatching of the Wyandotte line is carried on. In the city resort is frequently had to the expedient of running telephones lines suspended from the electric railway san wires by means of porcelain insulators. In some cases a common porcelain insulator is used tied to the span wire with the telephone line wire pulled through the hole in the center, and in other cases a porcelain insulator especially made for this kind of work has been put up. This location for the telephone wire keeps it free from interference with trees, which in Detroit and neighboring towns is a very important consideration, as the foliage is very heavy along many streets traversed by the electric roads.

In general, it may be said that the greatest care is exercised to maintain telephone communication without interruption, and in case there is trouble in any of the telephone lines its repair has the preference over any other work, as communication for dispatching is the first essential in the operation of long lines of road. The despatcher not only governs the operation of cars on interurban lines, but it is very helpful to all departments because he is in closer touch than anyone else with the actual operation of the entire system and just what is going on from hour to hour of various parts of the road. He receives the first reports of troubles along the line, both large and small, and is of great assistance to track and overhead departments by reporting to them defects reported by trainmen.

The number of passenger cars under the despatcher's care on the interurban lines on the ordinary schedule is twenty-two. On special occasions this may be increased to forty. To this should be added the work cars, freight cars and supply cars, which being irregular, run as extras, and so add to the despatcher's cares much more tan in proportion to their numbers.

On the Rapid Railway system the telephone used for dispatching are rented from the Bell Telephone company, and are maintained by that company. The orders are received by the motorman and are carefully repeated back to the despatcher. The conductor standards close at hand while the motorman repeats the order back, and then the conductor also steps to the telephone and repeats the order. On the Ypsilanti road th orders are received and repeated back by the motorman.