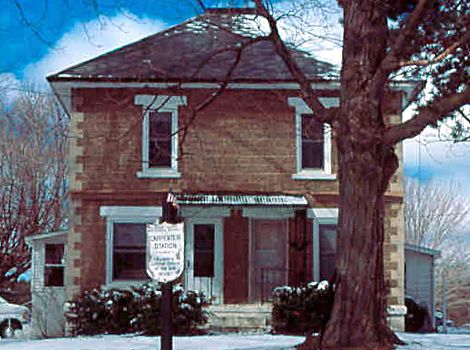 An informal inquiry, held by Coroner H.L. Baird at the courthouse Monday afternoon, established clearly that the wreck at Carpenters Station, seven miles North of Lapeer, Sunday forenoon, which caused the death of one man and injury to several, was due to an inexperienced brakeman’s misunderstanding of a signal made to him by the engineer of the train standing on the siding.

The brakeman, Clarence Huebler, told his story frankly to the coroner-told it in a voice that was tremulous with emotion. He said he was 22 years old, that he lived in the country near Wayne, and that he had been braking for only a few days.

His train, a southbound freight, drew into the Carpenters Station siding about 10 minutes before the north-bound passenger train leaving Lapeer at 10:10 AM was due there. He had walked ahead of the freight engine to a position near the switch, so as to be ready to turn it after the passenger had gone by.  As the passenger approached, the freight engineer, fearing the brakeman was standing dangerously close, motioned him to move back. Seeing no response the engineer waved again more vigorously.

Confused by the noise of the oncoming train and the seemingly frantic signaling of the engineer, the brakeman moved back a step or two and then, somehow seized with an idea that the signaling meant that the switch was wrong and should be turned, grabbed the handle and wrenched it around.

A moment later the passenger train, coming at a speed of more than 50 miles per hour, struck the switch, lurched violently off the straight-away onto the siding and crashed head-on into the freight locomotive.

It was one of the most destructive wrecks that ever occurred in Lapeer County.

It was rumored Monday that there might be a further investigation of the wreck by the Interstate Commerce Commission. The commission may send a representative to make a personal inquiry and report; possibly this representative will recommend a formal inquiry, with a public hearing. If that course is decided, the inquiry will probably be held in Lapeer.

That the casualties were not more numerous-only one person was killed and four persons injured-was due to the circumstances of there being two empty passenger cars and one baggage car ahead of the four occupied coaches. The locomotives were almost demolished, the empty cars badly wrecked, one of the empty coaches partly telescoped the combination baggage car and smoker, and one of the other coaches left the track.

In the combination car were the baggage man, Ralph Steele, and the brakeman, E. A. Bell.

When the crash came Steele was thrown the length of the car, pinned beneath wreckage and killed. Bell, who had been able to steady himself by clinging to a door handle, was also pinned down by wreckage, but was got out by George Carls and George McLaughlin, the later of Alviston, Ont., and a third man. George Carl and McLaughlin were at the home of a relative, Fred Carls, when they heard the noise of the crash and hurried to the scene. They put Bell, whose back had been injured and ankle sprained, into an auto and drove him to the Lapeer City hospital. There it developed on Monday that Bell had also suffered severe internal injuries.

Fred H. Russell, engineer, and Lewis Bening, fireman, realized the danger as soon as they saw the switch turned and just as the locomotive lurched onto the siding they jumped from the cab.

Russell’s back was injured and one ankle was sprained. Benings skull was fractured. Both were brought to the hospital in Lapeer. It was thought at first that Benings condition was critical, but he has improved. Russell is also getting better. Passengers on the train were severely shaken by the impact and several were thrown from their seats or onto the aisle floor.

Only one was severely hurt. She was Mrs. Norman Brooks of Bay City who was on her way home after having undergone an operation at an Ann Arbor hospital. Her jaw was fractured and she was bruised, but after receiving treatment at Lapeer hospital she was able to proceed to her home Sunday afternoon.

There were seven cars of livestock in the train standing in the siding. Many of the animals undoubtedly would have been killed had it not been that there was a car of cement between the locomotive and their cars.

Almost immediately after the crash the wreckage caught fire and the Lapeer Fire Department was called to the scene. The chemicals were exhausted without having made much of an impression on the flames, and the fire burned until after wrecking trains had arrived from the north and south. It was several hours before tracks were cleared so that other traffic could pass. While the rescue work was proceeding, the conductor of the passenger train, A. Persons, asked Fred Carls to go somewhere and call for medical aid and ambulances. Mr. Carls drove to the home of R.K. Booth, not far away, and telephoned Lapeer for help.

News of the accident traveled rapidly through the County and it was only a few minutes before autos began to arrive at the scene carrying persons curious to see the wreckage. Within half an hour there were scores of cars parked on the roads near the siding and people were swarming around the scene. When the wrecking crews and railroad officials and detectives arrived the crowd was kept back from the debris, but people continued to arrive all day, many having come long distances. It is estimated that more than 3,000 were at the scene before night.

Note: The Lapeer County Clarion was a weekly paper that was published on Wednesdays. The passenger train involved was # 203, a daily train from Detroit to Mackinaw City. The single track MC Bay City Branch was controlled by manual block and train orders, at the time of the accident, there were 8 passenger trains scheduled daily except Sunday, 4 north and 4 south. Sundays had 2 each way. Freight traffic was frequent with several trains carded each way daily. Carpenter Station was located at mileage 64.09 ( from Detroit), there was no operator on duty at Carpenter Station at this time. The first block station to the South was Lapeer Jct. open 24 hours, at Mile 58.40, and to the North was Columbiaville which was open from 6 AM to 6 PM at mileage 67.61. The siding at Carpenter Station held 50 cars and was located on the east side of the main track. There were no time table restrictions in effect at Carpenter and passenger trains were allowed 60 MPH and freight trains 40 MPH.  From Charlie Whipp.