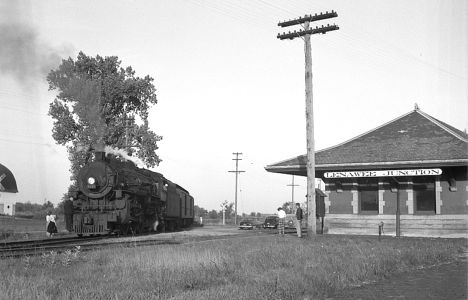 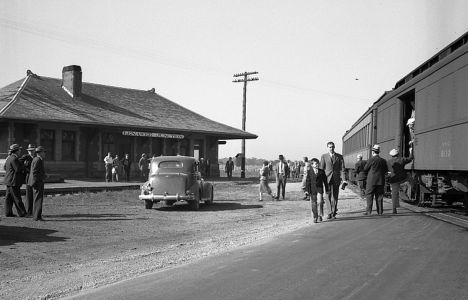 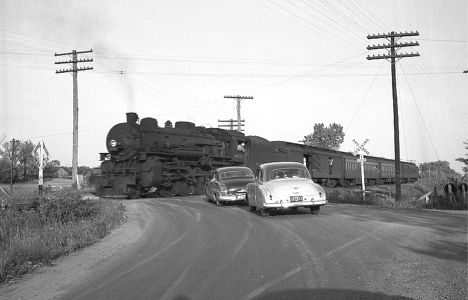 In 1954, the Toledo Railfans Association sponsored a special excursion train on the New York Central's Jackson Branch.  Railfan and photographer Cecil Hommerding was there to capture the event on film.

The Special started at Union Station in Jackson, headed east to Jackson Junction and then on to the Air Line for a short stretch to OD Tower (near today's Airline Drive).  With the assistance of the operator at OD, the train turned south on the wye and headed down the Jackson Branch.

The Special traveled through the countryside, passing through the towns of Napoleon and Norvell.  In Manchester, the train passed the junction with the MC Ypsilanti Branch, then over the timber trestle over the Raisin River south of town and onto Clinton.

The approach to downtown Tecumseh passed by the north yard and then the train slowed to a crawl as it began a short stretch of "street running" in the downtown area.  The M-50 intersection was a stop and flag location, and then the train proceeded south alongside Tecumseh Products, one of the most important shippers on the branch line at the time.

The train passed the approach signal for Raisin Center and upon entering the circuit it received the proceed signal for the automatic interlocking, crossing the Wabash right of way.

Shortly after clearing Raisin Center, the Special entered the yard limits at Lenawee Junction, which was the turn-around point for the excursion.

The train crossed the Monroe Branch diamond, then briefly entered the Old Road.  It then backed up to the Lenawee Junction station, where the railfans got the opportunity to disembark and walk around.  Soon, the train was reloaded and it continued to back up to the west leg of the wye.  It then began its journey back to Jackson.

No doubt, there were a couple of photo "run bys".  For younger railfans, a photo "run by" consisted of stopping the train in a scenic place, where everyone got off and found a desirable position to photograph the train.  The most adventurous photographers walked quite a distance to try to get a view of the train without other railfans in view.  But most just stepped back and took in the whole event, fans and all.  Under the careful eye of the conductor and the rear flagman, the engineer backed the train about a mile down the track and sounded the whistle.  The fireman worked up a full head of steam, and the train accelerated by the spectators, with camera shutters clicking wildly.  After passing the group, the train stopped, backed up again, and picked everyone up.

About ninety minutes after leaving Lenawee Junction, the home signal at OD again welcomed the group back to Jackson and the trip was deemed a success by all.

The timing of this event was significant and might have  figured into the plan, because in 1960 - just six years later - the heart of the Jackson Branch was abandoned, with the rails pulled up from US-127 near Jackson to Manchester on the south, ending through operations on perhaps Michigan's first true branch line.