By Don Lochbiler, The Detroit News, Written in 1968. 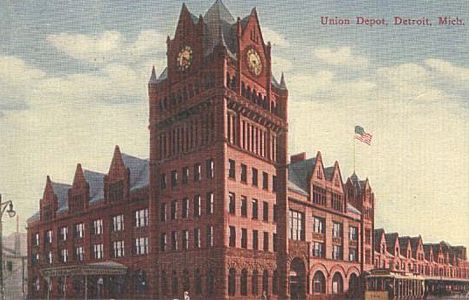 Once it was the busy hub of Detroit's railroad and lake steamer transportation. Arriving in the city, chances were good that when a traveler first set foot on Detroit pavement, he'd be on Third Street.

From the busy Union Depot at Fort [Fort Street Union Depot], past the Michigan Central depot at Jefferson [MCRR Third Street Station], down to the waiting room and docks of the Detroit & Cleveland Navigation Company at the river, Third [Street] was a daily hive of activity.

The bustle reached its peak on summer weekends. Crowds of hot-weather refugees from such sultry places as Kansas City and St. Louis rode in on the Wabash Cannonball and other crack trains. They breathed deep of the cooling breezes from the river, and merrily made their way down Third to embark for Harbor Beach, Alpena or Mackinac Island.

Third had traffic jams, too.  Motorists heading for the East would line up their cars at the foot of the street for hours before the sailing times of such leviathans of the lakes as the Greater Detroit or the City of Cleveland III. You could put your car aboard and enjoy an overnight cruise. In the morning you drove off refreshed at Cleveland or Buffalo.

Today [1968], only the Union Depot is left. The Michigan Central - later the New York Central, now the Penn Central - shifted to a new terminal on Roosevelt Park in 1913 - hastened in departure by a fire which broke out in the old depot the day after Christmas. It was a sad moment when the roof caved in at the height of the fire. The depot had been the pride of Detroit.  Numerous turrets made it look like a medieval castle and the waiting rooms - there was a separate waiting room for ladies - had marble floors.

The last D&C liner departed in 1954. That was the Greater Detroit, of cherished memory. Its broad decks held more than 600 staterooms.  It was the largest passenger ship on the Great Lakes and the biggest side-wheeler in the world. 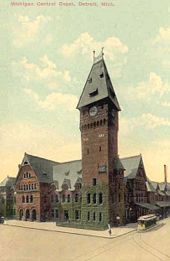 The hallowed short stretch of Third between Fort and the river now is split into two segments by the Lodge Expressway.

The Union Depot's interior was modernized in 1948, but on the outside the depot still looks much as it did when the first train pulled out January 21, 1893. Victorian architecture and gingerbread masonry make it a memorial to the golden age of railroading.

The Wabash and Pere Marquette, major movers in the establishment of the station, are still there under other names. The PM is part of the Chesapeake & Ohio now, and the Wabash is co-mingled in the Norfolk & Western. The Pere Marquette figured in Jay Gould's railroad empire, but the Wabash connection here was strictly a child of Detroit enterprise. The Midwest's most eminent railroad builder, James F. Joy, was 70 when he understood a road that would give his home city a direct route to St. Louis.

The Wabash Cannonball became one of America's fabled trains, with a ballad all its own. You can still take off from the Union Depot on the Cannonball for St. Louis every morning at 7:15. There are trains to Washington, Cincinnati, Richmond and Norfolk, and three accommodations daily to Lansing and Grand Rapids.

In all the years, the big clock on the Union Depot tower has changed but not a whit. It is still a landmark. Once each year, workmen remove the paint from the clock's faces and repaint them. Every seven or eight years it is stopped, the mechanism inspected, and minor adjustments made.

Then it goes right back on the job telling time, just as in those olden, golden days when Detroiters rode on steel wheels as well as rubber tires.