By Graydon Meints, AATW, Reprinted from "The Inside Track", December, 1979 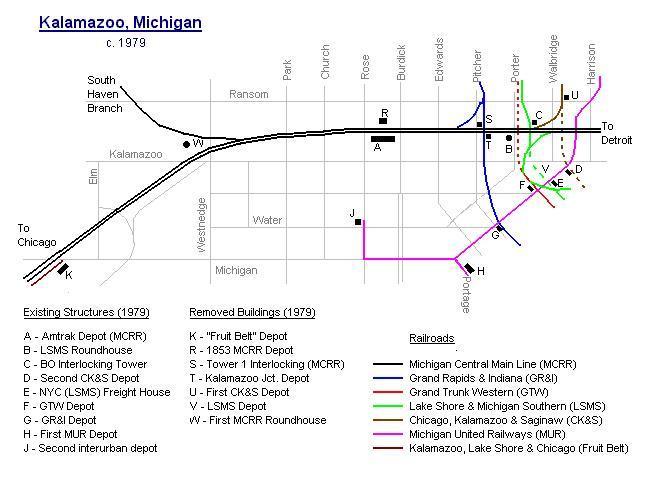 Kalamazoo, a pleasant, business-like city of 100,000-plus in southwestern Michigan, almost exactly half way on the Detroit-Chicago Amtrak (ex- Michigan Central) line, has more passenger stations standing today than certainly any city in Michigan and probably, in the nation. Of the seven buildings, five are railroad depots and two remain from interurban service. Best of all, a healthy walking tour will bring all of them in view.

The natural starting point of the tour is the Amtrak station, formally known as the Kalamazoo Intermodal Transportation Center. This large building was partially remodeled in 1977. The red brick Richardsonian Romanesque structure was designed by Cyrus W. L. Eidlitz immediately after he completed plans for Chicago's now-closed Dearborn Station. The Kalamazoo depot was dedicated with appropriate civic fanfare on October 1, 1887. An extensive formal garden formally the parking lot now located on the south side of the building. Originally built by the Michigan Central Railroad, it handled in its heyday MC main line and South Haven branch trains as well as trains off the Lake Shore & Michigan Southern's Grand Rapids branch and some Grand Rapids & Indiana (later Pennsylvania Railroad) runs.

The original wooden Michigan Central station was built in 1846 on the site of the present station. A later building, a Gothic-style wooden depot, stood across the tracks where the municipal bus garage is now.

The Michigan Central main line originally was placed down the center of Willard Street, named by the city founders for pioneer merchant Isaac W. Willard. The railroad gradually expended to fill all of Willard Street although and the brick and dirt alley along the north side of the right of way still is called Willard Street.

Walk east from the Amtrak station along the tracks a block and a half to the crossing of the ex-GR&I line; it extended originally 459 miles north from Richmond, Indiana to Mackinaw City, Michigan, at the Straits of Mackinaw. In the northwest angle of the diamond at this crossing is the foundation of Tower 1 - the second interlocking plant placed in service on the Michigan Central main, in about 1890. (The first interlocker was at Nichols crossing in Battle Creek, in 1887; the first anywhere on the MC - anywhere in Michigan, in fact - was at Wasepi in 1884.) On the southeast corner of the diamond is the foundation of the Kalamazoo Junction depot, a station used by passengers transferring between the MC and GR&I trains. It was a wooden building used from the early 1870's until about 1910. Through runs from Grand Rapids to Chicago eliminated much of the need for the building, and it was used by the Michigan Central's signal department until it was removed in the 1960's. The GR&I wye is in the northwest quadrant of this crossing and still can be used to reach the Amtrak station. Immediately east of the Kalamazoo Junction station foundation stands the Lake Shore & Michigan Southern roundhouse, now a three-stall brick building unmistakably showing its original use.

On the east edge of the next street east of the crossing, Porter Street, walking along the MC main line eastward, was the crossing of the MC main line by the Grand Trunk Western. This line was originally the Chicago & Kalamazoo Terminal, a GT subsidiary, and ran out some six miles north of the city to a gravel pit.

Continuing walking east, next is BO tower and the Kalamazoo branch crossing. This line was laid down in 1868 and became the Grand Rapids branch of the Lake Shore & Michigan Southern, coming north from Elkhart, Indiana, to White Pigeon in Michigan, through Kalamazoo and on to Grand Rapids. For many years, this line was New York Central trackage - in contrast to Michigan Central and Chicago, Kalamazoo & Saginaw, also NYC components - and carried its own switch engine crews and yardmasters. The original freight yards of the LS&MS for Kalamazoo were just north of BO tower. The swing that the line takes immediately north of the tower took the main line around the west edge of these long-gone yards.

A city block further east at mile post D-143 brings us to the end of the street and cross busy Michigan Avenue to its south side, and turn right or west. A short way beyond on your left is the shingle-sided E. M. Sergeant Coal Co. office. This building was the second CK&S depot, and the siding covers the original frame appearance. The depot was built in the early 1900's when the CK&S was extended south out of Kalamazoo to connect with the Grand Trunk's main line at Pavilion, a little more than 11 miles to the southeast. The building also served as the general offices of the CK&S as long as the railroad retained some semblance of independence from the NYC which controlled it. Behind the former depot the CK&S's former freight house still stands.

Resuming the walk west you come to the New York Central (or LS&MS) freight house, a large, well-proportioned brick and stone structure. About ten years ago the tracks along the west side of the building were removed when a new wye between the Kalamazoo branch and the MC main line was put in. The wooden LS&MS passenger station stood on the north side of the street where a car wash is now located.

A few hundred feet farther west, across the street, is the Grand Trunk Western depot. Built in 1907, this building served as both passenger and freight station as long as the railroad offered passenger service. In 1911 there were four round trips a day to Pavilion to connect with the main line but passenger service ceased very early in the 1930's probably in 1930 or 1931. Today this building is still used as a freight house by the Grand Trunk Western. Although the GTW owns it's own rails in Kalamazoo (the original CK&S), it reaches Kalamazoo over trackage leased from the CK&S, a least still in existence today between the GTW and Conrail.

A little farther west is the Grand Rapids & Indiana station, a stately Italian Revival depot, a wooden structure first was on this site, built in 1870 when the line came into town from the south. That building burned four years later, and was replaced by the present structure. In 1921 the GR&I was leased for 999 years to the Pennsylvania system. The depot is externally little changed from its original appearance although the pillared porch or platform trackside has been largely closed in. The building is now the Whistle Stop restaurant.

Nor walk two blocks southwest to Portage Street and turn left to 179 Portage - the Wilkins & Wheaton Engineering building. This was Kalamazoo's first interurban depot, built in 1906 by the Michigan United Railways, the sign over the first story windows reading "Interurban Station" has been painted over but is still legible when viewed from an angle. The curve off the street into the station was so sharp that inbound or westbound cars had to run past the station up to Michigan Avenue, wye in the street, return down Portage Street and back up into the covered passenger area. The freight loading facilities were at the rear of the building and some vestiges of these still can be seen. This location remained a station until 1914 when operations were transferred to a new station.

Next, go back up to Portage Street, then left (or west) on Michigan Avenue for two blocks, then right on Rose Street a block along the west side of the Kalamazoo Center. On the northwest corner of Water Street is a large five-story building that once served as Kalamazoo's second interurban station. It was built in 1872 by the company of Lawrence & Chapin as a heavy iron foundry. In 1914, the Michigan United Railways moved its operations from the Portage Street depot to this location shortly before the opening of its Grand Rapids-Kalamazoo line. The station tracks were on the north side of the building where the parking lot now is. This building continued as a station until 1928 when both the Grand Rapids and Battle Creek MUR lines were abandoned. The building now is a furniture store.

To get to Kalamazoo's seventh station, go back to Michigan Avenue, turn right and go west 3/4 mile to the railroad crossing on West Main Street. Across the street from the park, along the east bank of Arcadia Creek and hidden in the trees, is the diminutive waiting room-ticket office of the "Fruit Belt" line - the Kalamazoo, Lake Shore & Chicago. The Fruit Belt was incorporated in 1906 to amalgamate the Pere Marquette-owned South Haven & Eastern, the discarded Michigan Central main line between Kalamazoo and Mattawan, and a jerry-built section of track between Mattawan and Lawton. (The SH&E was a merger of the Toledo & South Haven and the quaint Paw Paw Railroad which, in turn, was one of the oldest parts of the Pere Marquette system.) The PM originally bought the SH&E to acquire a route into Kalamazoo. It planned to obtain control of the Chicago, Kalamazoo & Saginaw to provide itself with a shorter route between Chicago and Detroit via Woodbury at the end of the CK&S rather than the longer route via Holland and Grand Rapids. But the Michigan Central got to the CK&S first, about 1901, and the PM was stuck with the SH&E. The Fruit Belt least was the best solution to a bad situation. The Fruit Belt's owners were interurban people who planned to electrify the line and, by using steamships out of South Haven, provide through service from Detroit to Chicago. Those hopes did not materialize, however, and the Fruit Belt lasted until 1923 when it drowned in a flood of red ink. (Note: the freight house behind the depot was taken down several years ago and only recently has the waiting room been removed.  The building is now re-erected on private property near Kalamazoo.) The park across from the Fruit Belt depot site is dedicated to the memory of a group of women who, around 1890, were killed in a collision of a Michigan Central train with a horse-drawn streetcar.

Walk through the park and along the tracks back to the Michigan Central- Amtrak station. On your left, after the third street crossing (Kalamazoo Avenue), in the open cinder-covered area, is the site of the first Michigan Central roundhouse in the city. Until seven or eight years ago, when it was razed, the structure served a coal yard, but foundations and the outline of the turntable pit still can be seen. Just beyond it to the north is the track of the South Haven branch. Passenger trains once made three trips each way to the Lake Michigan port on this line, but the line was discontinued in 1973 and removed in 1977. Only a few miles of track in Kalamazoo remain.

In all, Kalamazoo has had 12 passenger stations and two interurban depots. You have seen, if you took this tour, the location of all but one; the twelfth station was on the New York Central's Kalamazoo branch where this line crossed Portage Street and, fittingly enough, the station carried the name Portage Street. Of that building, no trace remains.

DON MEINTS is a life-long resident of Kalamazoo. A member of the Executive Committee of the Michigan Association of Railroad Passengers (JMARP), he has been editor of MARP's monthly newsletter, WOLVERINE MAINLINER. He is a member of the Lexington Group, a nationwide organization of railroad historians. Don is an official of a local saving and loan association and has worked on the railroad as a tower operator, among other duties.

The Rails Come to Kalamazoo