By William Duchaine, from the Escanaba Daily Press, December 27, 1950 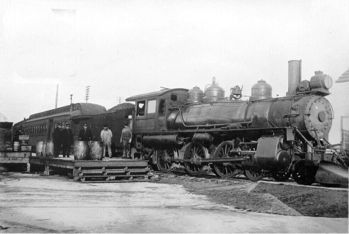 The Escanaba & Lake Superior Railroad was closely linked with the lumbering and iron ore shipping of the region for many years, and now is playing an important role in the industrial activity of Escanaba and vicinity.

The E&LS is a busy industrial “belt line.”  Its tracks serve more than thirty of the leading industries and wholesale distribution concerns in the area.

There were some who thought the Escanaba & Lake Superior would have to fold up when lumbering dwindled to almost nothing in the territory and the railroad lost its iron ore hauling business, but the E&LS management saw the situation in a more favorable light.

It decided to convert from coal burning engines to the more economical diesels. The two Baldwin Diesels – the 1,000 HP No. 100 and the 660 HP Switcher No. 101 – now do virtually all the pushing and pulling of cars in the local yards and on the road to Channing.

Two steam locomotives are still held in reserve, however, for relief and special duty. These are No. 14, a Baldwin 4-6-0, purchased new in 1917, and No. 18, built by American Locomotive for the Green Bay & Western Railway in 1913, and purchased and rebuilt by the E&LS in its Wells shops in 1935.

The coach is of ancient vintage – about fifty years old – lighted with Aladdin lamps and heated with a coal-stove. It was purchased from the Copper Range Railway, subsidiary of the Copper Range Mining Company of Painesdale.

Emil Christensen, who was appointed General Manager of the E&LS after the death of George W. Brow, rides a yellow painted Ford Car, with flanged rubber tires, when he goes on an inspection trip up the main line to Channing and intermediate points.  A hydraulic jack device is used to make a turn around with the inspection car.

Getting down to the small-fry rolling stock the E&LS has seven motorized “handcars”, one for each of six sections and an extra track car for special duty.

At one time when lumbering operations of the I. Stephenson Company were at their height on the mainline and branches, the E&LS had two fire cars to protect millions of feet of logs piled on landings alongside its tracks. The tank cars are now used for diesel oil storage.

The two fire cars each had 8,000-gallon capacity tanks, equipped with powerful steam pumpers that would throw a stream of water the distance of a city block. During the big Mashek fire of 1926, the equipment saved 2,000,000 feet of logs at the landings. When the two C&NW Ore Docks burned down in 1924, the E&LS fire cars pumped water from Little Bay De Noc and kept the C. Reiss Coal Docks from catching fire.

Isaac Stephenson, the Marinette lumber baron who made millions cutting the white pine of Wisconsin and Upper Michigan and represented Wisconsin in the US Senate, was the guiding hand in the founding of the E&LS.

The big timber along the Escanaba River attracted the enterprising Maine woodsman, Jefferson Sinclair and Daniel Wells Jr., in the middle of the last century. They built a water mill at the site of the present No. 1 dam. Some members of the sawmill workers’ families of that pioneer Flat Rock mill community were buried in a cemetery in Pioneer Trail Park. Vandals defaced and broke the headstones, and only a few fragments can be found in a small fenced in plot.

Later, Harrison and Nelson Ludington, for whom Escanaba’s main business street was named, joined Sinclair and Wells in the lumbering enterprise. The firm name became the N. Ludington Company. Isaac Stephenson, a native of New Brunswick, entered the company in 1850.  He increased his holdings steadily until 1888 when the name was changed to the I. Stephenson Company.

For several decades, logs were floating down the Escanaba River on the spring drives to the sawmills at Flat Rock and Wells.

In 1897, the Escanaba River company, a subsidiary of the I. Stephenson Company, built a seven-mile railroad from Wells to tap a large hardwood timber stand at LaFave’s hill.  In 1898, the name was changed to the Escanaba & Lake Superior Railway and the tracks were extended to Watson.

Pine log drives continued for about fifteen years after the line was built to Watson, as jobbers continued to cut timber within an economical sleigh haul from the Escanaba River and its tributaries.

Branch lines were built by the E&LS, to get out the remote timber stands, the Ralph, Turner, Mashek, Northland, Ford River and Hendricks branches, with total trackage of more than 100 miles.

During the boom years, about 100 million feet of logs came by river and train to the two large sawmills at Wells.  One mill was a four-band, with two re-saws, which operated a day shift on pine, spruce and other softwoods.  It ran until 1921.  The other was a two-ban mill with gang re-saws, which cut hardwood day and night until the I. Stephenson Company suspended operations in 1943.  The biggest cut was 116 million feet of logs in 1912.

The Escanaba & Lake Superior Railway was chartered on November 17, 1898.

The company was reorganized on February 12, 1900 as the Escanaba & Lake Superior Railroad. H.J. Brown of Marinette succeeded Van Cleve as First Vice President. C.W. Kates became the Auditor in 1901, and later rose to General Manager.

The E&LS now has about 75 employees. Among the oldest from point of years of service are:

For years, the E&LS was operating four ore trains and two log trains daily, with one or two extra log trains a day in the winter. Telegraph operators were employed at depots at Turner, Ralph, Northland, Watson, Hendricks, Woodlawn and Salva, a station near Cornell.

These telegraph stations were discontinued with the passing of heavy traffic on the main line. Now days the mixed trains No’s 1 & 2 operate daily except Monday and Saturday, pulling an average of 10 cars on each trip. Distance from Wells to Channing is 63 miles.

The E&LS applied this year to the Michigan Public Service Commission for permission to operate without schedule on this mixed train run, but the application was denied.  The train carries an old combination passenger-baggage coach, but the passenger business is virtually nil.

During 1949, the total passenger revenue was only $80, as compared to more that $200 daily in the early 20’s and two coaches were used to carry lumberjacks, drummers and schoolteachers up the main line and its branches.  In September of this year, only one passenger made the trip from Wells to Channing.  Business “picked up” in October when five fares were collected.

With the loss of iron ore traffic and the drastic decline of forest product movement, the outlook appeared gloomy for the E&LS railroad.  It had been in some respects streamlined to the status of a terminal railroad because its main line business is not what it used to be.  The five-day a week run on the main line is made to deliver to and receive freight from the Milwaukee Road at Channing.

There were some who thought the E&LS would have to liquidate, but George W. Brown, who had many years of railroading experience with the Milwaukee Road, Soo Line and the E&LS, took an optimistic view of the situation.

Brown advised the switch from steam to diesel motive power to achieve operating economies. The 1000 HP Baldwin Diesel No. 100 was acquired in June 1946, and the 660 HP Baldwin Switcher No. 101 in December 1947.

Savings in fuel costs were quickly apparent, and much less shop work is needed to keep the diesels running.

“Gosh, they can run those diesels for less money than I can run my car,” said Machinist Frank Winchester, in a half-serious vein. Frank, the son of the late Conductor, Charles Winchester, who helped to lay the right of way to Watson, is now all alone in the E&LS machine shop that once employed more than a dozed men.

The E&LS, as the originating line, receives a sizable share of the freight bill on carloads it receives from local industries and turns over to the C&NW at Wells and the Soo Line at North Escanaba.

Holding six memberships in the Escanaba Chamber of Commerce, the E&LS in participating actively in efforts to attract new industries to this community. Fortunately, the railroad has several industrial sites along its tracks. With its main offices in Wells, the E&LS does not take long to give its decision to industrial prospects. The Harnischfeger expansion program was a case in point.

A track laying crew was out the next day as promised, and the E&LS had completed its end of the bargain before Harnischfeger got the foundation laid.

All the leading industries in the Escanaba area are served by the E&LS railroad.  Besides Harnischfeger, it has on its tracks:

Most of these industries and distributing Company warehouses are located on the Escanaba branch of the E&LS – an oval-shaped belt line consisting of four and a half miles of track.  All together the E&LS has 95 miles of track, including 63 ½ miles on the main line.

The E&LS has a well equipped machine and car shop which played an important role in World War II when about forty machinist, boilermakers, carpenters, welders and other mechanics were employed. In the indoor car shop, 75 to 150 feet, built of reinforced concrete in 1921, there is trackage for repairing and rebuilding five cars at one time.

The E&LS shops got a real shot in the arm when the Escanaba Ore Dock project was launched to build facilities here for the diversion of iron ore from the Minnesota ranges in the event of the bombing of the Sault Ste. Marie Locks.

“The dock project started on October 6, 1942, and we were going here to beat the band on October 10." Ole Thorsen, Master Mechanic, recalls.

The E&LS shops went to work rebuilding and re-tubing small steam boilers and pumps for pumping water, giving fire protection and operating pile drivers on the dock project. The contractors, Merritt Chapman & Scott, picked up old equipment all over the country and sent them to Wells for overhauling.

Another wartime activity was the overhauling of old locomotives purchased by Harry P. Bourke from lumbering and mining companies, and later sold to the government for use at army cantonments, munitions plants and air bases.  Thirteen engines in all went through the Wells shops, including four heavy Saddle-Tank locomotives, shipped dismantled of flat cars from Old Mexico to Wells. In addition, seven locomotive cranes were rebuilt before the program ended in 1944.

In addition, the E&LS Machine Shop also worked on sub-contractors for the Lake Shore Engineering Works of Marquette; machining parts for war equipment made by the Packard Motor Company plants in Detroit.

As America is moving into another heavy rearmament program, the E&LS shops stand ready, with their machines and tools all kept in a spick and span condition. With the diesels now performing virtually all the motive power duty, the E&LS Shops will be able to do more contract work than ever.