Article: History of the Detroit, Caro and Sandusky Railway

The Detroit, Caro & Sandusky Railway was spawned through the demise of the parent railroad, the Detroit, Bay City & Western Railroad whose assets and property was sold by its Receiver in Bankruptcy at the Federal Court of Bay City, Michigan in April of 1925. Some of the bonds issued to aid in the original financing of the construction of the Detroit, Bay City & Western Railroad and then defaulted by its bankruptcy had been sold to customers through the Chicago, Illinois brokerage firm of Mills & Gray.

At the bankruptcy sale which covered the remaining portion of the railroad running from Bay City to Port Huron was sold to that brokerage firm for their successful bid of $200,000. They were apparently endeavoring to protect their customer's interest, if any remained, in the defaulted bonds. John Gray of that firm made a hurried trip to Chicago to secure the money to cover the bid and which he did by surrendering his personal note to the Continental Illinois Bank of Chicago for $200,000. That he could obtain that amount of money which was a very large sum in the year 1925 and on an instant notice bespeaks his financial standing with the second largest bank in the country at that time. At one time, Mr. Gray headed the bond department of the Continental Illinois Bank.

To repay the bank, new bonds were issued and sold in the amount of the purchase price and in May, 1925, a new railroad under the name of the Detroit, Caro & Sandusky Railway commenced operation under its new owners, Mills & Gray. The headquarters of the railroad were moved from Bay City to Caro, and John Mac Lachlan was appointed General Manager, a position he held until the abandonment of the railway.

The planned operation of the new railway was from Caro to Fargo, some seventeen miles north of Port Huron. The principle reason for not operating the line into Port Huron was the prohibited cost of restoring into safe, operable condition the high wooden trestle bridge over Mill Creek just south of the town of Fargo. This was the highest wooden bridge in Michigan and the cost of rehabilitation and maintenance would be financially impossible. 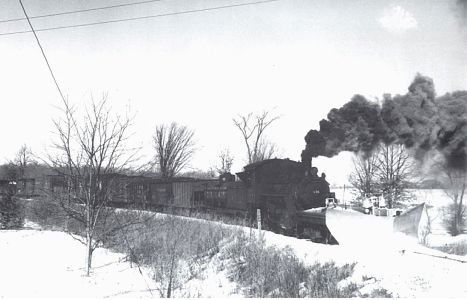 Photo info/credit: DC&S 134 pushes a snow plow ahead of its train near Hemans, MI. Date not known. [TJ Gaffney collection].

The volume of traffic between Bay City and Caro did not warrant maintaining that portion of 28 miles of track as passenger traffic would not be considered over the new line; automobiles had eliminated this traffic entirely. This portion was used in the fall for sugar beet movement only until 1928, when it was torn up and scrapped as it had suffered irreparable damage to the roadbed and bridge at Quanicassee River by the flood waters of Saginaw Bay. As the rails were torn up on the abandoned portions of the line, the iron scrap and the right-of-way was sold and the proceeds used to retire some of the original bond issue.

The railway was later shortened by the abandonment of an eight mile stretch from Fargo to Roseburg due to scarcity of business over that portion.  And still later, and for the same reason that stretch from Roseburg to Peck was abandoned.

In 1948 it was decided to shorten the railway still further and Sandusky became its final terminal so that in the last stages of its operation, the railway consisted of only 30 miles of main line. The land comprising the right-of-way from Peck to Sandusky was sold to the Detroit Edison Company.

In 1942, John Gray bought out the interest of his partner, A. Lawrence Mills, in the railway. Mr. Gray, as sole owner and a resident of Waukesha, Wisconsin, personally oversaw the operation of the road from that time on, acting as President and Treasurer and sometimes train engineer until the last train pulled into

Caro in March, 1953. On June 15, 1946, I had come out of semi-retirement to act as Secretary and General Auditor for the company and for the second time I alone was left on the payroll of a railroad company following its cessation. Again, the closing of stations fell to my lot and I was left to write the final chapter of the closing of a Michigan railroad. Operation of the road legally ended on December 31, 1953 by consent of the Interstate Commerce Commission.

Although the last train in March, 1953 had rung down the curtain on the actual operation, the railway, much like the finale of the Detroit, Bay City & Western Railroad, its predecessor, refused to lie down and die peacefully. On June 8, 1953, Mr. Gray decided to move an engine out of Caro to pick up some old equipment that was left on the road when the operation ceased.

The regular engineer normally would have been Charles Ferguson, but he had suffered a heart attack earlier that year and Mr. Gray planned on handling the engine alone. But Mr. Ferguson insisted on accompanying him and running the engine.

Charles Ferguson had been with either the D.B.C.&.W.RR. or the D.C.&S. Ry. ever since the age of 16 when he was employed to help lay track for the construction of the D.B.C.&W.R.R. He ended his employment with that road as Section Foreman with its closure and when the D.C.&.S. Ry. commenced operation he became its regular engineer.

With a perfect safety record and feeling fully recovered from his recent illness he could see no reason to stay home that June day in 1953. But coming into the little settlement of Daytona, some 8 miles out of Caro, he suffered his second heart attack and died with his hand on the throttle, which is the way he probably would have preferred if a choice was given. So, like the grandfather and the clock, Charles Ferguson and his beloved railroad died together.

Co-incidentally, Byron Hewitt, who also had spent most of his working days with the two railroads first as Section /Foreman and then as Conductor for D.C.&S. Ry. trains and workmate and close friend of Charles Ferguson, died just a few days later by drowning.

Like its predecessor, the Detroit, Caro & Sandusky Ry. was forced to cease when it had exhausted its financial resources in attempting to surmount obstacles over which it had little or no control. The federally subsidized and State maintained highways that finally were to parallel its line, the government subsidized lake boats, the privately owned passenger automobile formed a combination with which it was impossible to compete. The natural mineral resources of coal and gravel originally found along its right-of-way became exhausted. There may possibly come a time when the railroads will be again found necessary to the welfare of the country but they can only survive if they have equal subsidization now given all other forms of transportation.

Following the closing of the operation of the railway, bids were taken for the sale of the rails, engines and other equipment on a scrap metal basis. The Morris Nover Company of Saginaw bought the rails on a where-is, as-is basis and removed them from the right-of-way during the summer of 1954. The ties were sold to individuals from where the ties laid. Morris Nover also purchased all the other metal equipment including the engines and the rolling stock.

With the exception of some land included within the limits of the towns along the line which were usually sold to nearby residents and two or three small pieces that reverted back to the original owners as specified in the deeds, the entire right-of-way from the eastern limits of the village of Caro to the western limits of Sandusky was sold to the Detroit Edison Company. Before the closing of the road, all of the original bond issue had been redeemed and all outstanding bills paid. Regular employees received severance pay, measured in terms of position and length of service with the railway.

Unlike its predecessor, the railroad ceased operation with honor and financial integrity.

The abandonment of these two railroads was only the beginning. As the railroads are at an ever increasing rate ceasing to exist, there also leaves a vacant spot in the hearts of many Americans. No longer do the steam chime whistles echo through the hills and over the countryside. The railroad depot is no longer a community meeting place and a distant trip has become just another impersonal event. The hobo jungle in the river sand bank at the end of Montague Avenue, where the smell of Mulligan Stew could always be found on a summer day, had been vacated permanently. And when the railroad stock yards in Caro were removed, the bulletins written by the tramps that detailed the qualities of the Caro housewives and the law enforcement officers then vanished. Progress in furnishing many modern advantages of its rapid stride also eliminates some of the romance and content that we once enjoyed.

Irl Baguley, author of the "History of the Detroit Bay City & Western Railroad and of "The History of the Detroit, Caro & Sandusky Railway", commenced his railroad career in 1914 with the Detroit & Mackinac Railroad at their station in Tawas City, Michigan. Later, he served as station agent for that railroad and the Michigan Central Railroad prior to his taking over the duties as station agent for the Detroit, Bay City & Western Railroad in April, 1920. Following the demise of that line in 1925, he was employed as freight and passenger agent for the Michigan Central Railroad in Caro until 1934. He entered the service of the Detroit, Caro & Sandusky Railway in Caro in June, 1946 acting as General Auditor for that company until it ceased operation in December, 1953. He is the last person to leave the payrolls of both the DBC&W RR and the DC&S Ry. when their operation ceased. His railroad career covered the high tide of railroading from 1915 to 1925 and its low ebb during and following the Great Depression.