By Nathan Nietering. All photos by the author.

Through the late 1980s and first half of the 1990s, the large Conrail classification yard at Elkhart, Indiana was switched primarily by unique GP10/MT-4 slug combinations. The history of both classes are quite interesting. The Conrail GP10s were all rebuilt and upgraded Penn Central GP9s, a project Conrail undertook to upgrade some older power from 1976-1979. These upgraded locomotives were able to generate 1800hp, and most retained their high hoods (though a few received low nose chops). The GP10s I remember switching at Elkhart were all in the high end of the Conrail 7500 series and were originally Pennsylvania Railroad GP9s. These locomotives were in the 7200 series on the PRR and retained those numbers by Penn Central and Conrail until they were rebuilt, when they were given their later 7500 series numbers.

The GP10 locomotives that switched at Elkhart (and other yards) were equipped with Pace Setter Hump Control, and were able to operate as mother units for the 4-axle MT-4 slugs. Included locomotives with these features were CR 7572-7575 and CR 7582-7597. In addition to working the classification hump, sets of GP10s and MT-4s did most other flat switching and train building around the yard. These geeps and slugs were not permanently coupled, and could be reassigned to other duties. All of the sets I remember seeing at Elkhart had the geep "mother" unit facing west (short hood forward, although the long hood end was still designated with the frame "F") with the slug coupled to the long hood end. I remember seeing #7588, #7594, and #7596, and I’m sure others worked there as well.

The MT-4 slugs (Motor-Trailer 4-axle) are all rebuilt from ex Pennsylvania (PRR) and New York Central (NYC) RS-11 Alcos, a project which took place concurrent with the GP10 rebuild program during 1979. The diesel engine, generator and cab were removed from each RS-11.  Remaining from the Alco RS-11's were the trucks, the under frame, and the traction motors. The bodies were chopped down to a lower profile. This work was done at the Conrail Altoona, Pennsylvania shops. A total of 24 such units underwent this "slug" conversion, numbered 1000-1023. Each slug retained it's Alco trademark slanted number boards on each end of the body. I remember seeing #1015, #1017, #1018, and #1020 at Elkhart, and no doubt others were there as well.These could be rotated among any of the GP10s on hand to assist in switching work.

The last GP10s were retired from active service in 1997, although a few remained in storage until 1999. The last photo I have of one working at Elkhart is 1994. Many of the MT-4s were also retired in 1997, leaving just four on the roster at the time of the 1999 Conrail split to CSX and Norfolk Southern.

When the GP10/MT-4 sets were replaced at Elkhart, new teams of locomotives and slugs could be found. These worked out to be SD38 locomotives paired with MT-6 slugs. SD38s were well suited for slow speeds and heavy pulling, making them ideal for switching and hump work. Thirty five SD38s were purchased by the Penn Central and arrived in April 1970. Over the successive years, they were upgraded or modified as necessary, but always served primarily in the yard switching and hump duties as originally intended. On Conrail, these SD38s have been numbered in the 6925-6959 numbering block, the same series they had on the Penn Central. The majority of these locomotives are equipped with Standard or Pacesetter Hump Control equipment. Likewise, nearly every SD38 is equipped to operate as a slug mother for MT-6 or MT-4 yard slugs. Most SD38s had MT-6 slugs until the GP10s began to be retired, freeing up more MT-4s to also be used with the newer and larger SD38s.

The MT-6 slug conversion program was undertaken by Conrail at their Collinwood Shops and at General Electric’s nearby Cleveland Shops at the same time as the MT-4s were being converted, primarily in 1979. These were rebuilt from Pennsylvania Railroad heritage Alco RSD12s and RSD15s. The process was the same as the MT-4 rebuild, but turning out longer 6-axle slugs (hence, MT-6 for Motor-Trailer 6-axle). However, the MT-6s each received an additional rebuild in the late 1980s, replacing their original 6-axle Alco trucks with EMD trucks from retired SD7s and SD9s. As with the MT-4 slugs, the larger MT-6s retain their familiar Alco slanted number boards on each end. The MT-6 slugs filled the 1100 series on Conrail, and a total of 30 slugs were built in this style. I have a photo of Conrail #1126, a former RSD15, working at Elkhart, but I remember seeing other sets there as well.

I only have photos of one Conrail era set working at Elkhart, although I remember seeing blue sets at a distance at other times. The set I have is SD38 #6951 (Pacesetter Hump Control) and MT-6 slug #1126, working on April 17, 1999 in fresh Conrail Quality paint. Since the CSX-NS split of Big Blue later that year, sets of SD38s and MT-6s have remained in use at Elkhart. I’ve seen a few Blue pairs working at Elkhart, though I know some of the sets have been repainted into NS colors. A few have also been equipped to work with Remote-Control operation, with the ubiquitous strobes mounted to the roof of both powered unit and slug, though I don’t know if the Elkhart sets operate with R/C or not. The 21 SD38s NS received are numbered 3800-3820, and the 16 MT-6 slugs have been renumbered 970-985. At this time in late 2006, NS is embarking in a rewiring program for the slugs, and when they are out-shopped they are designated as an RPU6, and are renumbered into the 850 or 860 series. As of December 2006, about half of the MT-6 slugs have undergone this process. As these RPU6s come out of the shop, they all sport the latest NS "Horsehead" paint scheme.

Since the Conrail split, I’ve seen a few different blue SD38/MT-6 pairs working at Elkhart. I have photos of SD38s #3816 and #3819, and MT-6s #979 and #980, all still in Conrail blue with patched numbers. It is interesting to see one generation of locomotives and slugs replaced by another, and observe that this slug switching process continues in operation so close to Michigan today. I’m glad I was able to see some of the GP10/MT-4 sets before they were retired, a real vestige of the past. Then or now, it’s a great way to see some older power which would be rare if observed on the road. Next time you’re down near Elkhart, take a drive by the Robert R. Young rail yard on the west side of town, and perhaps you’ll see an Alco-body slug and twin-fan SD38 working in the distance. 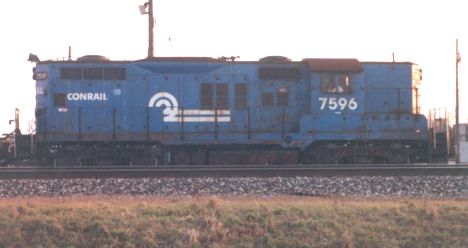 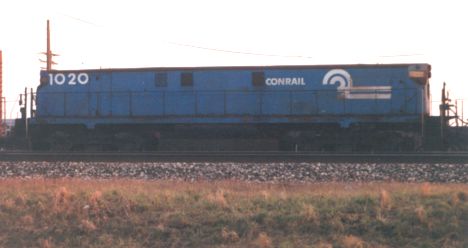 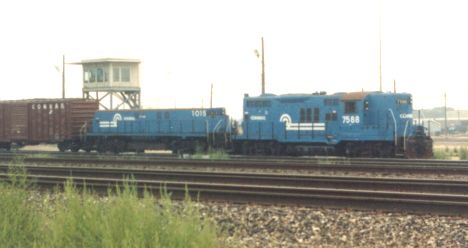 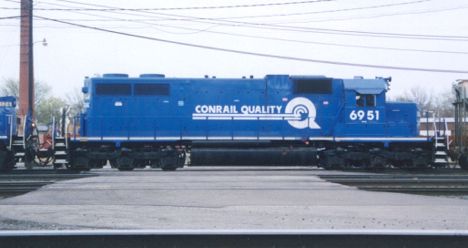 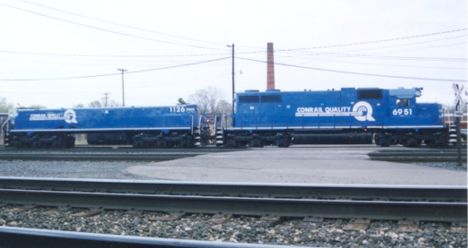