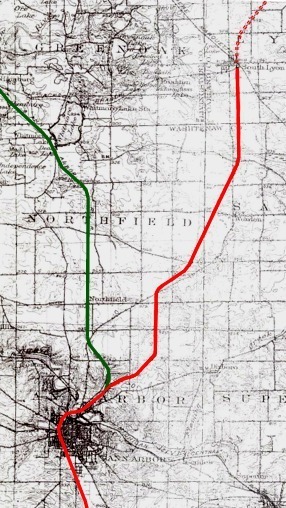 One goal of the people behind the Ann Arbor Railroad was to build their line as a wide, rural belt line around Detroit from Toledo north to Ann Arbor, and then northeast to Pontiac to  connect with the Grand Trunk.

Top Map: This is a drawing on a 1901-1902 Survey Map of the Ann Arbor Quadrangle from the Michigan State Board of Geological Survey.  The red line is the Toledo, Ann Arbor and Northeastern original line.  The dotted line north of South Lyon was the planned route to Pontiac.  This line was ultimately used by the Grand Trunk to reach South Lyon as a part of its Jackson Subdivision.  In the summer of 1890, the new Ann Arbor line (in dark green) was run north and northwest from a location known as Leland, which was in the area south of Dhu Varran Road west of Nixon Road.  [MBGS - James Hannum]

Poor's Manual of Railroads, by Henry Varnum Poor, Edition of 1881, details the early history of the railroad and its line which was eventually operated between Ann Arbor and South Lyon:

"In 1881, the company was called the Toledo and Ann Arbor Railroad Company, from Toledo to Ann Arbor, 46 miles.  It was completed on August 1, 1880.  The Toledo, Ann Arbor and North-eastern Railroad Company was organized to extend the former line 38 miles to Pontiac to reach the Grand Trunk Railway, and to bring that line into direct connection with the lines entering Toledo.

"At South Lyons [sic], on this extension, 15 miles north of Ann Arbor, and to which the line is now opened, a connection is now made with the Detroit, Lansing and Northern Railroad, with which a traffic contract for southern connections has been made.

"The rest of the extension is now ready for iron, which is being laid, to be completed to Pontiac by September 1, 1881."

A map from the Railroad Maps of the United States: A Selective Annotated Bibliography of Original 19th-century Maps in the Geography and Map Division of the Library of Congress, compiled by Andrew M. Modelski, Washington, Library of Congress, 1975, (below) shows the entire projected route of the Toledo, Ann Arbor and Grand Trunk Railway in 1881.  The latter portion, north of South Lyon, was never put into service by the TAA&GT and was soon sold to the Grand Trunk Railway which used it as part of its line to Jackson.

The segment of railroad from Ann Arbor to South Lyon remained in use until at least 11 August, 1890.  On that date, the Toledo, Ann Arbor and North Michigan Railway Co. (as the company was called after March, 1888) sold the 8 mile portion between Leland, north of Ann Arbor, and South Lyon, to the South Lyons [sic] and Northern Railway Company.  It is clear that Leland was the place where the newly consolidated line northwest to Frankfort diverged from the older line to South Lyon.  Modern maps don't indicate where the station known as Leland used to be, but it likely was situated south of Dhu Varren Road and west of Nixon Road. In the 1892 edition of Poor's, the line to South Lyon is no longer shown. 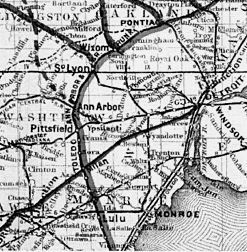 The map above is scanned from the 1901/1902 Survey Map of the Ann Arbor Quadrangle, produced by the Michigan State Board of Geological Survey.  The abandoned line is indicated in red.  Most modern day county roads can be found on this map, and used as a point of reference to locate the old grade.

Comment from Tom Beauvais of Ann Arbor, Michigan on 3/28/2005 regarding the article "The TAA&GT line to South Lyon" by James Hannum:

I happen to be preparing maps of the Fleming Creek watershed for the Huron River Watershed Council and the South Lyon route went through the very northwestern portion of it.  The author's "likely" location of the Leland depot" is about 2 miles to far south according to an 1895 county atlas.  It appears, the depot was at the intersection of Northfield Church Road and Earhardt Rd in Northfield Township, Washtenaw County.

I used the alignment as shown in the reprint 1895 Atlas of Washtenaw County (I believe by George Ogle, Chicago). I used the Atlas in the local history room of the Ann Arbor library, main branch.  The township plats for Ann Arbor and Northfield show the route in detail.  The South Lyon route diverged in Sec.16 Ann Arbor township and into the sw 1/4 of section 15 going northeastward and then crossing into section 14 and heading north into section 11. At about 1/2 mile up into section 11 it followed the 1/2 mile line north and all the way through section 2. It then turned into section 35 of Northfield township and went northeasterly cutting through the intersection of sections 35,36, 26, 25 of Northfield township.

The plat map shows a small black square (the depot) at the very southeast corner of section 26 just nw of the current intersection of Northfield Church Road (e-w) and Earhardt Rd (n-s).  The land according to the 2002 Plat Book of Washtenaw County is marked owned by the Leland Acres Subdivision.

The depot is marked as "Leland Sta." and there is a post office called "Emery" across the tracks from the depot in the very southwest corner of section 25.

Hope this sheds some light on the Leland depot location.