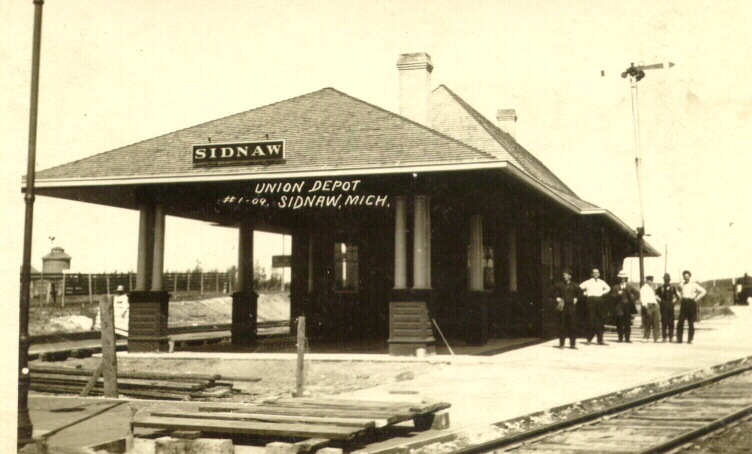 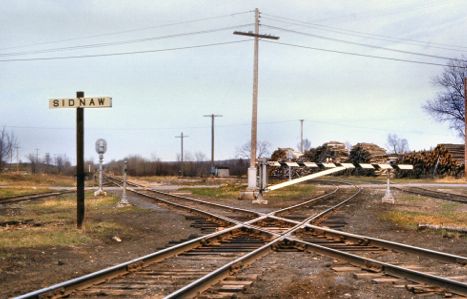 Sidnaw was a junction/crossing of the Duluth, South Shore & Atlantic railroad and the Chicago, Milwaukee & St. Paul railroad (Milwaukee Road). In addition to a MILW-style union depot, the crossing was protected by a simple interlocker, signal and gate system. This location is 25 miles west of Nestoria in southeast Houghton County. It was a lumber town which was first settled in 1889. [MPN]

The name of the town is a corruption of the name Cedenomg, meaning a place between two hills. [Ironwood News-Record 1894-0818]

The interlocking tower at Sidnaw was closed in 1929 and the gate/signal system in the photo was established. This lasted until the DSSA line to the west was removed in the 1990's. [SOO/W/2018]

This town, or parts of it burned several times in the late 1800's and early 1900's, mostly due to forest fires. [DFP and others]

Photo Info/Credit: Top, the union depot at Sidnaw, used by the Milwaukee Road and the Duluth, South Shore and Atlantic. 2nd photo, Sidnaw's automatic interlocking. This photo looks west on the former DSS&A main line. [Greg Bunce], 3rd photo, another photo of the crossing in the 1980's. [Rob Kitchen]

The MILW and DSS&A had a joint water tower at Sidnaw with standpipes on both roads for filling locomotives. [GB]

The MILW had a stub-wye off their main line just northwest of the diamond, north of M-28, now used as a forest loading site.

Remnants of the old signal system exist at the old crossing, as of 2021.

The Diamond Match Company harvested the forests in this area. [DFP + others]

1892. Sidnaw is another place you have never heard of, but you will. It is a station at the junction of the Duluth, South Shore & Atlantic and the Milwaukee & Northern railroads, and has not only abundant mineral resources, but is in the very heart of a great pine and hardwood country, and excellent farming lands. One year ago, there was a railway station and five other buildings. To-day there is one sawmill in operation and another being erected, a planning mill, a shingle mill, three large general stores, three good hotels and 350 population. The hotels are all crowded and a strictly first-class "house" is the crying necessity of the place. [DFP-1892-1130]

1894. The Milwaukee Road had a small turntable at Sidnaw, located just east of the tower and depot, on the north side of their track (south of the DSSA track). [SMA]

1896. Early on Wednesday morning Booth's mill at Sdnaw, which was being used by Mr. Bergland for sawing his logs, caught fire and was entirely destroyed. [CN-1896-0130]

1896. Connections are now established at Sidnaw between the DSS&A and the CM&StP so that the trip from Houghton to Ontonagon can now be made the same day. Leaving Houghton at 9 am Ontonagon is reached at 5 pm, and returning Ontonagon is left at 9 am and Houghton is reached at 7:25 pm. This is an improvement on having to stop over night at Sidnaw en route. The CM&StP makes very slow time between Sidnaw and Ontonagon. The distance, 47 miles, is made in four hours. [CN-1896-0312]

December 10, 1902. Boiler Explosion Kills Three Men. The boiler in Smith & Steinbraker's sawmill, four miles north of Bruce's Crossing on the Military road, Ontonagon County, blew up killing Mr. Steinbraker and two others, one of whom was a Mr. Hughes.

1903. The Diamond Match Company has received at Sidnaw a carload of the finest heavy draft horses ever brought to the upper peninsula. The lightest one in the consignment weighs 1,500 pounds. The company now has 36 horses in its camps near Sidnaw. [DFP-1;903-0207]

January 16, 1909. Fire destroyed a large portion of the village of Sidnaw last Thursday. The loss is estimated to be about $17,000 with no insurance.

1909. A new station has been constructed at Sidnaw at the junction of the C. M. & St. P. This station is neat and commodious and a credit to the companies constructing same. [MCR-1909]

December 26, 1916. Copper Train Wrecked. Milwaukee Flyer Over Copper Range Ditched Near Sidnaw. The copper country special which runs from Chicago to Calumet over the Copper Range railroad was wrecked on the big fill north of Sidnaw last yesterday night with only one person severely injured. The wreck was such a complete one that some of the cars went completely off the right-of-way and all of them excepting the one next to the engine went down the bank.

The exact cause of the wreck has not been learned but it is supposed to have been a broken rail. Railroad men report that it will be several days before the wreck is completely cleared. The sleeper was put upon the tracks Thursday after two days work on it.

One man had his leg badly broken. Otherwise there was no serious injury, the fact that the coaches were of steel saving many lives. The wreck caused the suspension of all traffic on the Ontonagon branch of the Milwaukee last Wednesday. Only the wrecking train was run over the road for the entire day. One woman extricated herself and her three children from the coach and walked the three miles to Sidnaw, taking her small children along with her through the cold of that frosty morning. [DD-1916-1230]

1918. The DSS&A had an agent here during the day and operator/telegraphers at the crossing around the clock. [TRT]