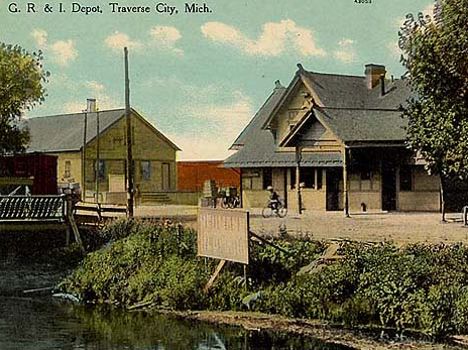 The Grand Rapids & Indiana was the first railroad to arrive in Traverse City in 1872.

The GR&I passenger station was built on the edge of West Bay at the north end of Park Street, just west of the mouth of the Boardman River. It was used until 1949, when the railway discontinued all passenger service north of Cadillac. The station, a freight warehouse and tracks soon were removed from the waterfront in preparation for the building of Grandview Parkway. [TCRE-2019-1215]

Photo Info/Credit: The GR&I depot in a postcard view near the turn of the century. [Alan Loftis collection]