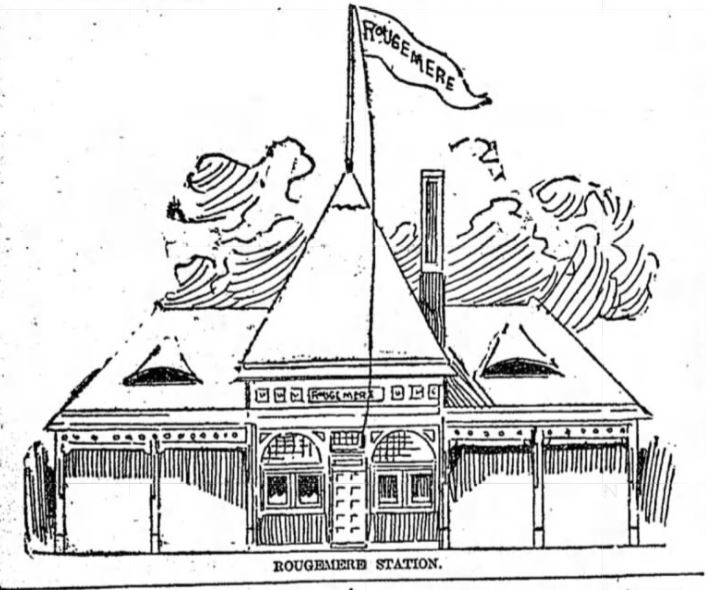 Rougemere was a station on the Detroit, Lansing & Northern railroad (later PM/C&O/ CSX) in 1894. [MPN] It was located along the east side of what later became the Ford Motor Company Rouge works.

Photo info: Left, this is a drawing of the proposed F& PM depot at Rougemere. A station here was under construction in 1893. [DFP]

1890. It is reported that the Flint & Pere Marquette has purchased the David Miller farm of 70 acres, situated on Michigan avenue six miles west of [Detroit} city hall for $70,000. This purchase is to be improved by a depot on Michigan Avenue and a car and repair foundry at the intersection of the F& PM and Michigan Central railroads. [DFP-1890-1228]

1893. A new station is under construction at Rougemere, on the lines of the F& PM, the DL&N, the C&WM and the tracks of the Union Terminal Company. From the west half of the new Belt line there are some twenty trains daily, and the directors are considering the advisability of operating a train every half hour between Union station, 12th street, Clark avenue, Delray, Woodmere and Rougemere, at a five-cent fare. The time from Union station to Rougemere is only twelve minutes, which is about half the running time of the electric cars. Travel is large and will be greatly augmented by the establishment of the new transfer yard and shops at Rougemere, which the company said will be constructed the present summer. [DFP-1893-0528]