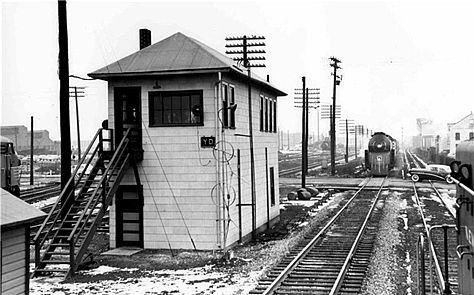 Pleasant Street Tower, also known by its telegraph call "YD", was located along the parallel Michigan Central and Lake Shore (Detroit to Toledo) lines, about 1/3 of a mile south of the Rouge River drawbridge. This interlocking tower controlled the Junction Yard connection with the main lines, as well as the entrance to the Marsh Track. YD was staffed by an MC operator. The small tower was replaced by a shanty in the 1970's. It no longer exists.

Photo info/credit: YD Tower, located at Pleasant Street in River Rouge. This photo, taken on February 8, 1955, shows the B&O #53, the Cincinnatian traveling south in the northbound lane approaching the tower, enroute to Ohio on NYC trackage rights. The 53 is powered by one of the B&O President-class streamlined Pacific's. The entire train, including these beautiful engines, were painted in the B&O's striking Royal Blue paint scheme. The B&O passenger trains operated out of MC station in Detroit, over the NYC to Toledo to connect with their own Toledo Division for the run to Cincinnati. B&O trains also operated out of Detroit via Deshler, Ohio to Baltimore, Washington DC, and Louisville, Kentucky. On the side track (at the right), is Ernie Novak's switcher. On the far left, an F-unit led freight train is proceeding around the curve northbound towards Schaefer Tower and Junction Yard. [Ernie Novak/Charlie Whipp collection]. 2nd photo, a copy of the 1907 blueprint for Pleasant Street and YD Tower. The right side of the blueprint is north towards River Rouge Bridge and West Detroit. The track going off to the upper right is what is now known as the Junction Yard branch. When this line was built, the branch was known as the Detroit, Dearborn & Delray branch which was a Michigan Central operation. As the branch entered the YD interlocker, it crossed the old Lake Shore & Michigan Southern line (later the southbound main line) at grade, and then merged with the Michigan Central line (later the northbound main line). [Michigan Archives]

1917, The MC had an operator towerman here around-the-clock. [TRT]

1925. The semaphore dwarf signals on the Marsh branch are changed to two-color light signals. [MPUC-1926]