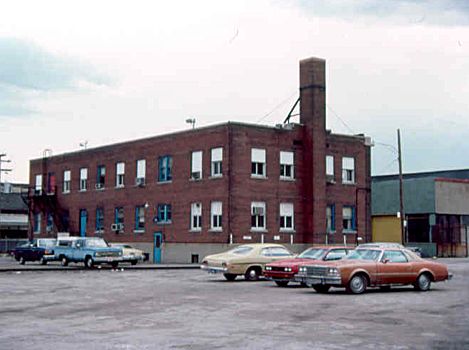 Photo info: Top, this is the Grand Trunk Western office at Milwaukee Junction, taken in 1986.  It was located in the SW quadrant of the crossing.   [Charlie Whipp]

The GTW had a water tower at Milwaukee Junction. [MRC-Cal/73]

1900. July 29. One of two special trains, bringing Buffalo Bill's entourage from Ypsilanti to Pontiac was backing into a wye at Milwaukee Junction to reach the westbound DGH&M line. They used the wrong wye track and backed into a switch engine which was trying to get out of the way. The crash collapsed the caboose on the back of the special train into the passenger car in front of it. One rodeo employee died and 10 were injured. The railroad suggested that they would not be sued because the cars used by the rodeo outfit were old and unsafe. [DFP-1900-0729]

1918. Driven by almost constantly reoccurring cold weather and inability to obtain fuel in a legitimate way and emboldened in many instances by illness in the family, hundreds of Detroiters are stealing coal out of coal yards and off coal trains. Thefts now have become so numerous and reach such an aggregate volume that police, railway detectives and fuel administration officials admit they are virtually hopeless.

Officials of the Grand Trunk railroad report that two cars of coal consigned to the Diamond Coal & Coke company were hardly switched into the Milwaukee Junction yards before a crowd of fully 200 men, women and children swarmed upon the cars, and both were unloaded in less than two hours. Of the cars, barely five tons remained. Sixteen arrests were made during the day by the police and four by railway special officers. During the last four days 55 persons have been convicted of stealing coal and paid fines of $5 and more. Ten are serving slight jail sentences because they are unable to pay a fine. [DFP-1918-0129]