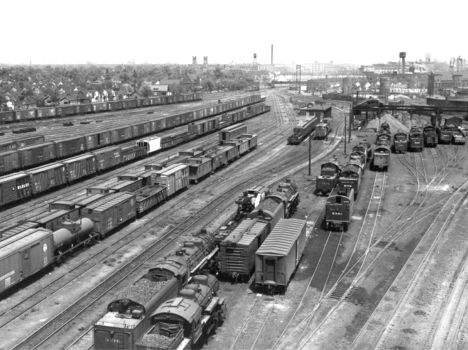 Photo info: Top, the east end of New York Central's Livernois Yard in Detroit, showing part of the engine facility to the right. Beyond the yard in the distance is West Detroit tower. 1954. [Ernie Novak/Charlie Whipp collection]

Two separate roundhouses were located here, along with a very large coalling facility and other shops.

Energy is displayed at the site of the Michigan Central's new works. A side track furnishes the building material and the loaded cars give a business air to the place. The excavations for the building foundation have all been made, and the material is on the ground to commence work. The lowness of the ground is the only drawback, and to obviate this difficulty large drains, tunnel like, are in progress of construction. [DFP-1873-0218]