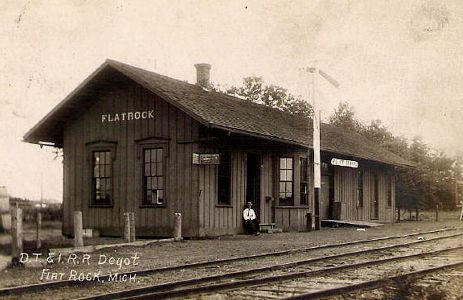 Flat Rock was served by the Chicago and Canada Southern railroad (on their line from Grosse Isle to Fayette, Indiana) and later the Detroit, Toledo & Ironton which established a large classification yard here after being purchased by Ford Motor Company interests in the 1920's.

Photo info: The Detroit, Toledo & Ironton depot at Flat Rock, in southern Wayne County. Given the age and style of this depot, it may have been built by the Canada Southern and leased to the DT&I when the latter road used the CS to bridge from the Trenton area to Tecumseh. [Alan Loftis Collection]

1918: The DT&I had operators on duty on the day shift at this location. [TRT]