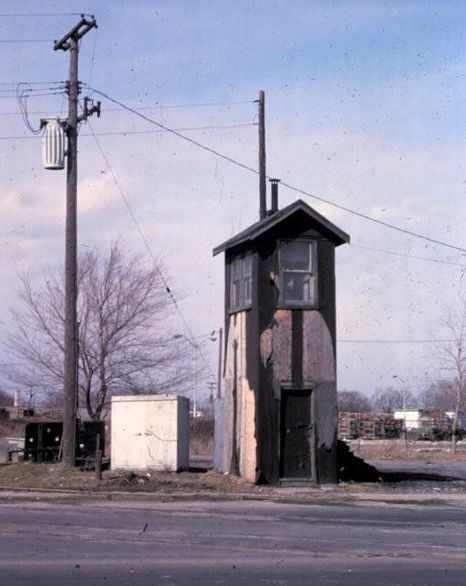 Photo info: Top, this is the watchman's tower at the East Warren Avenue crossing of the Detroit Terminal Railroad in 1976. This tower, which had been abandoned at the time of the photo, was occupied by the crossing watchman, who spotted approaching trains and then went downstairs to block the crossing.  Though some crossings were protected by train activated crossing equipment, E. Warren Avenue was adjacent to a DT yard where back and forth switching was common. Rather than activate the gates each time, a crossing watchman could more precisely control the traffic, as well as pedestrians. Many watchman locations were required by city ordinance or by the Michigan Railroad Commissioner (in response to city petitions). Watchmen were a costly part of doing business in urban areas. [Charles Geletzke Jr].