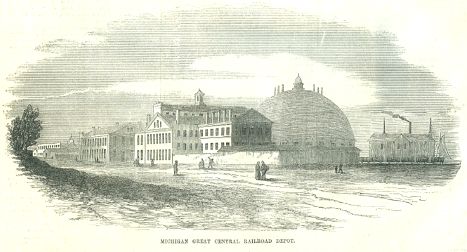 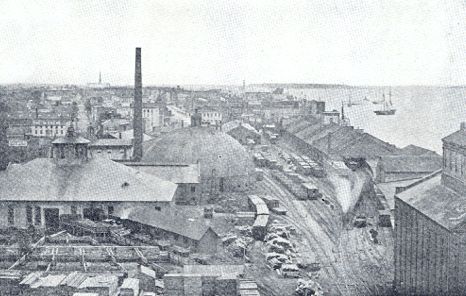 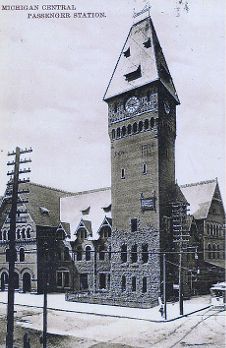 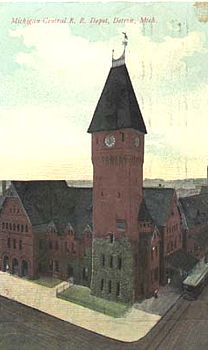 This station was built in 1849, replacing a small station at Campus Martius built by the state's central railroad. This Third Street station was replaced by the tall Michigan Central depot (near the tunnel entrance) a day earlier than planned, when a fire caused the building to be unusable. The depot was used for a number of years as a freight station.

Photo info/credit: Top, a 1854 engraving of the Michigan Central depot and roundhouse. 2nd photo, a 1868 photo looking north along the river. The roundhouse is the domed building in the center. Behind it to the right in the back is the passenger station. To the right, between the yard and the river is the MC freight house which has transload facilities between rail and boats. In these times, railroad freight cars were actually brought into the building to be unloaded. 3rd photo, a postcard view of the Third Street Station in Detroit, serving the Michigan Central railroad. This was the 2nd of three MC passenger stations in Detroit and served from about 1850 until 1913 when the larger depot with better access to trains from the tunnel was opened.

1876. Immense numbers of swallows infest the MCRR freight depot, and the building resounds with their chirruping. [DFP-1876-0530]

1966. The station was destroyed in a spectacular 5-alarm fire on June 19, 1966 which was believed to have been set by vagrants.

The Detroit, Grand Rapids and Western (predecessor to the Pere Marquette) used this station until 1893, when the Fort Street Union Station opened. The DGR&W connected with the MC main line at West Detroit. [COFTD]