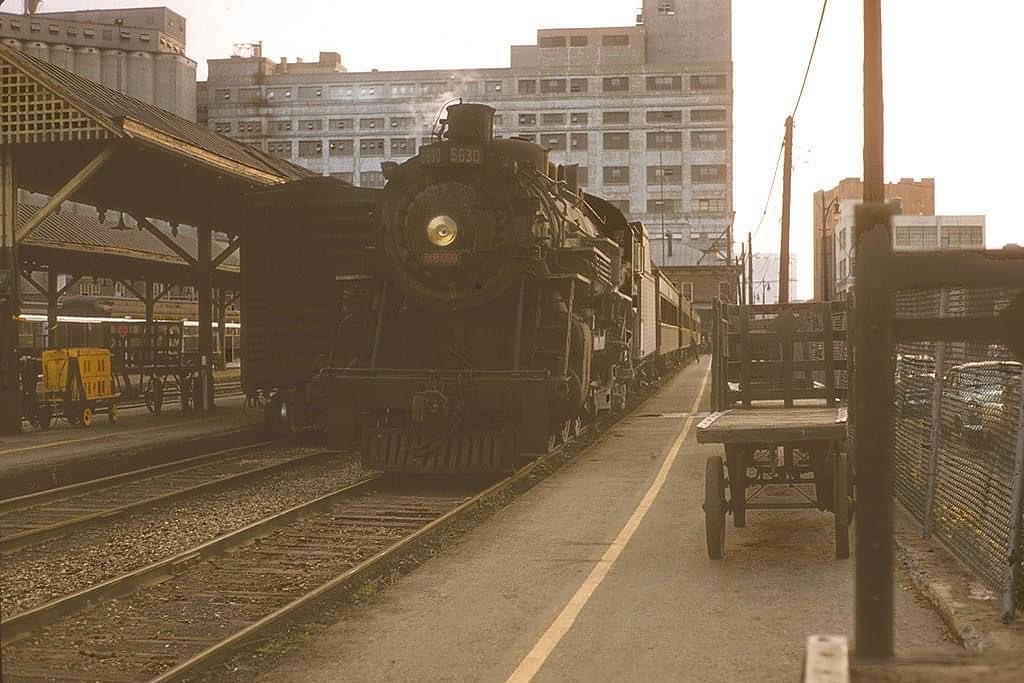 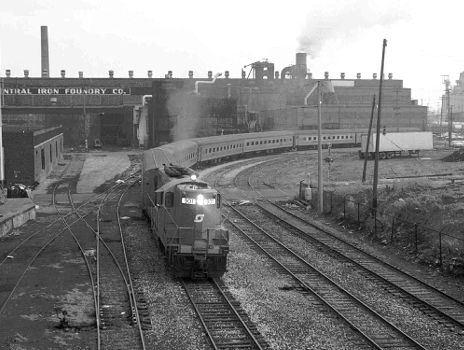 Brush Street Station was the primary Grand Trunk Western station in the City of Detroit. It was located along the Detroit River at the foot of Brush Street. The station was also used by the Lake Shore & Michigan Southern railroad until about 1908 when the NYC switched their terminal to the new Michigan Central station. The GTW also has a freight house, team tracks and a small yard at this location, along with car ferry docks to reach Windsor, Ontario. [MCTC- 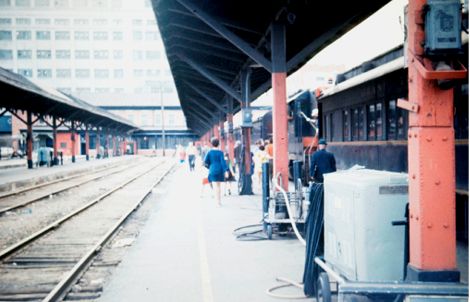 Photo info: Top, Brush Street station about 1860 in Detroit. [Detroit Public Library collection]. 2nd photo, GTW 5634 is on the head end of a passenger train at the depot. 3rd photo, the Southeastern Michigan Transportation Authority, also known as SEMTA, operated commuter passenger trains between Brush Street Station in Detroit and the City of Pontiac during the early 1980's. The photo shows a typical train and consist which has just left Brush Street station and is now heading north towards Milwaukee Junction on an evening run. The Central Iron Foundry Company is in the background and appears to be closed. 1982  [Charlie Whipp photo]; 4th photo, the Brush Street station platform in Detroit in the 1970's [Tim Tryon collection]

1866. The destruction by fire of the original Brush Street depot and adjoining property, a ferry boat and passenger train, with heavy loss of life, was one of the principal holocausts of Detroit's history. In the evening of April 26, 1866, barrels of naphtha were being loaded upon a freight car, and alongside the car stood a passenger train, well filled with passengers, as the departure was scheduled for 10:00 p.m. The ferry boat Windsor was unloading merchandise at the dock. One of the naphtha barrels was observed to be leaking, and when someone approached with a lighted lantern to examine the barrel, an explosion immediately occurred. The blazing fluid was scattered in every direction; other naphtha barrels exploded and quickly the buildings, the passenger train and the ferryboat were afire. Some of the people jumped into the river, but most of them stood refuge on the ferryboat, which soon drifted into the river aflame, the mooring line having been burned through. The Windsor drifted down the river, and to her assistance went the ferryboat Detroit, while the revenue cutter John Sherman secured those who had jumped into the water. Despite all efforts of the rescuers, seventeen persons were burned to death in the hold of the Windsor. In the passenger train, which was prevented from leaving by a freight train ahead, the occupants were hustled from their cars and berths, but one man was suffocated to death. Every building on the water front between Brush and Hastings streets was destroyed. The loss of property in this fire was estimated at $1,000,000. [HWC]