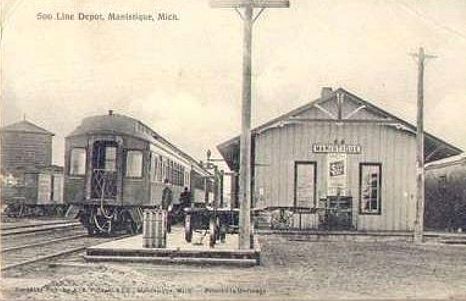 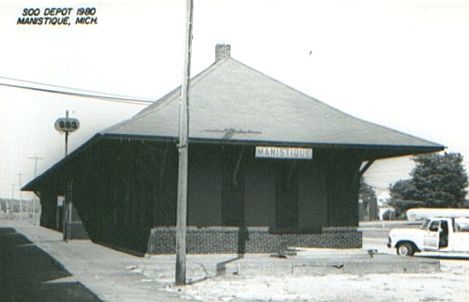 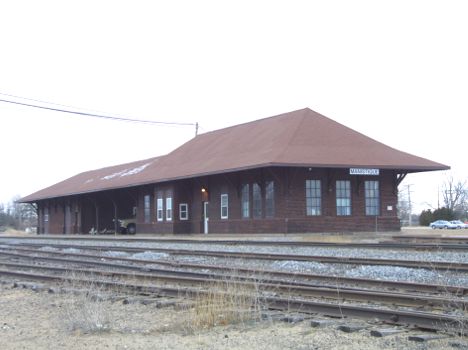 Manistique was founded about 1871 in south central Schoolcraft County. It was also known for a time as Monistique and also Epsport, but changed to Manistique in 1879. The town is the county seat of Schoolcraft County and was incorporated as a village in 1885 and a city in 1901. [MPN]

Manistique was a significant station on the Soo Line railroad between Gladstone and Sault Ste. Marie. The Manistique & Lake Superior railroad crossed the Soo Line here and interchanged cars, including ferry traffic to the MLS dock from the Traverse City area.

The M&LS had a turntable in Manistique, which was removed when the railroad was abandoned and pulled up.

The Soo Line depot was built at Wolf and Mackinac Streets about 1920. [UPM]

Manistique River Bridge. The Soo Line crossed the Manistique Rover on a seven-span steel girder bridge, 10' wide and 280' long, resting on finished ashlar piers and abutments. It was designed by C. F. Lowete and constructed in 1899 at a cost of $50,000 by the Gillette-Herzog Manufacturing Company. The chief engineer of the railroad at the time was Thomas Greene. The nameplate proudly proclaims "2-160 Ton Loco's" which is presumably the weight capacity of the bridge at the time. [UPM]

1920 - The Michigan Public Utilities Commission orders the MStP&SSM railway to immediately construct or or remodel the freight depot here. They were also ordered to submit plans for approval. [MPUC-1920]