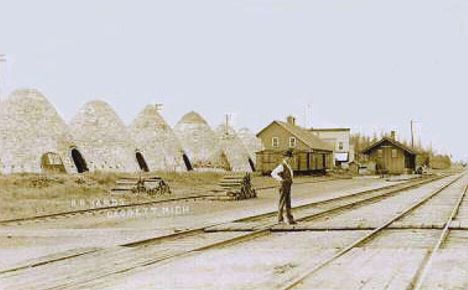 Dagget was founded about 1876 under the direction of the Holmes & Son Lumber Company. The town was incorporated as a village in 1902. [MPN]

Dagget was located on the Chicago & North Western railroad line between Menominee and Powers. Specifically, the town is about four miles north of Stephenson.

1945. On May 14, 1945, the MPSC received an application from the Chicago and North Western Railway Company,  requesting to be relieved of maintaining a caretaker at their Daggett station thirty minutes before the arrival of Passenger Train No. 121, due at Daggett at 6:48 A. M., and thirty minutes after its departure, as required by the Commission's order, dated September 9, 1943, The Commission is further advised in said letter that the patronage at Daggett station, since October of 1943, amounted to but 1.2 persons per day having boarded or detrained from Trains No. 121 and No. 224 (southbound, 4:27 P. M.), most of which applies to Train No. 224, and that such patronage does not warrant the further continuation of the maintenance of a caretaker at the station. The Commission is further advised that, if the Commission is agreeable to the modification of said order of September 9, 1943, the C&NW will arrange for the waiting room of the Daggett station to be left open, and, during the winter months, a supply of fuel will be kept on hand so that a fire can be started by any prospective passenger, if desired. Likewise, arrangements can be made to have the waiting room lighted. Mail is handled by a postal departmental manager, and no service of the caretaker is required in this regard, An investigation of the premises in question having been made by a representative of this department, the Commission is advised, in the report of said investigation, that very few persons patronize Train No. 121 at Daggett station, and that, since the railroad company had discontinued Daggett as an agency station, all business that could possibly be handled by trucks was so handled, and therefore there is no necessity for the caretaker to be on duty. The Commission, finds that the passenger business at Daggett station for Train No. 121 is insufficient to warrant the maintenance of a caretaker and therefore said application should be granted. [MPSC-1945]