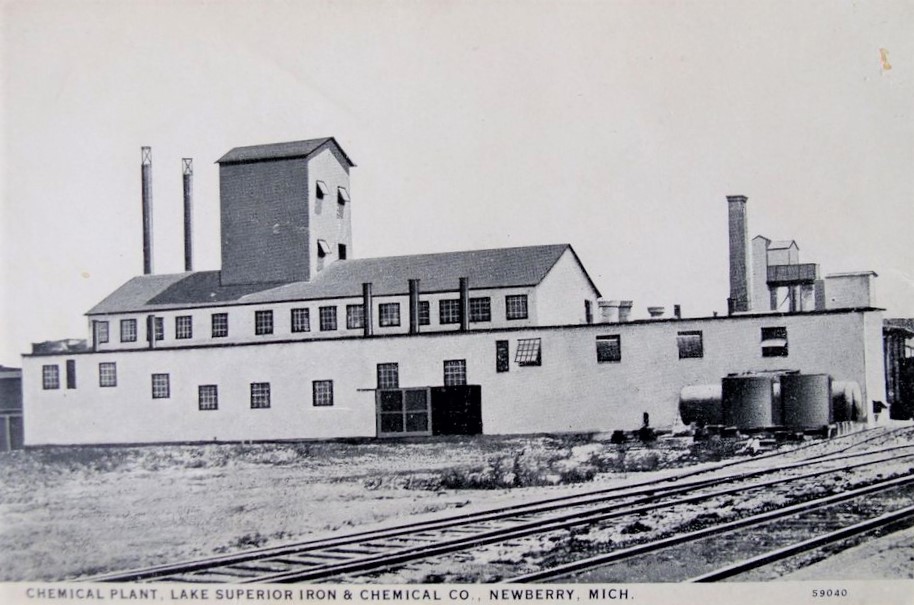 The Newberry Furnace was an industrial facility in the village of Newberry, in Luce County. It was active around the turn of the 20th century. The furnace received iron ore and produced iron, both of which were shipped in and out by rail on the DSS&A.

1902. The Michigan Iron Co. Ltd. is the name of the new company that now owns and controls the Newberry Furnace property. the organization of the new company was effected a Detroit this week and articles of association have been filed in Lansing.

The work of tearing down the old charcoalkilns and tramway at the furnace is progressing rapidly. Every available man is being put to work, and te only thing tht is hindering ooperations is the scarcity of labor. Brick for the erection of the new kilns is arriving daily and it is expected by next week a crew of masons will arrive to commence laying brick.

Operations from now on will be rushed with the greatest possible speed and if the plans of thise in charg do not miscarry, the furnace will be ready to go in blast by the first of February. [TDD-1902-1101]

1910.  Located on the Duluth, South Shore and Atlantic Railroad, in the town of Newberry, this was a charcoal blast furnace known as the Newberry furnace. In 1910 the furance was acquired by the Lake Superior Iron and Chemical Company.

It has been erected for a considerable period and was been in operation off and on for many years. Extensive repairs and alterations were made around 1910 by the LSI&C.

Attached to the furnace were two Durham iron pipe stoves, each one of which has 16 pipes. It was the intention to heat the blast to a temperature of 950° F., and use a pressure of 5½ pounds. The blast is furnished by one Nordberg cross compound horizontal engine having a capacity of 10,000 cubic feet. There is also a Weimer blowing engine of 8,000 cubic feet capacity that can be used as a spare. In the boiler house are found 8 horizontal tubular boilers giving a total of 1,200 H. P.

When completed (in 1910) this plant will be equipped so as to get to as great an extent as possible all of the values that are found in the wood. Timber is brought to the company's saw mill and there sawed and such pieces as are of proper grade are sold for building purposes. The refuse from the mill, consisting as it does of odd ends, sides, and slabs too small for sale as lumber, are taken to the company's charcoal ovens for conversion into charcoal, wood alcohol, and calcium acetate.

The old plant (pre-1910) consisted of 54-100-cord brick charcoal kilns. In using these, it takes about 30 days to fill, fire, and turn a beehive charcoal kiln. The entire process was known technically as "turning." These kilns will still be used but only to a limited extent. In fact they will only be used for the using up of the large wood. The new installation consists of 20 retort kilns which are capable of daily carbonizing 160 cords of wood. Such an installation makes this the largest charcoal retort kiln plant in the world. Besides the 20 retort burning kilns there are 40 retorts for cooling, 20 of which are for the hot coals and 20 for the cooler coals. In cold weather it will probably be necessary to operate but the first set of coolers. Each retort is 47' long, 78" wide and 96" high. The volatile gases as they come from the burning of the wood give a light distillate which is essentially wood alcohol and also a heavy distillate. This latter product by further distillation gives tar and a product which, when treated with lime, gives calcium acetate. [IMIM-1910]